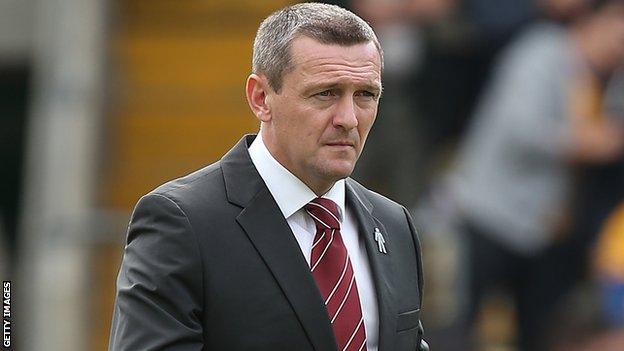 Northampton Town manager Aidy Boothroyd says he is the right man to turn their results around.

The Cobblers have lost eight of their 10 league and cup matches this season.

Boothroyd told BBC Radio Northampton: "The club is in a far better place than it was and it's only a matter of time [before results improve].

"I'm not one for resigning or giving up. These are my players. I've got backing from everyone within the club. I'm the man to put this right."

He added: "I've got a pretty good track record, not just here but elsewhere.

"I'm not shirking away from anything. I was the man to put it right when we were bottom of the league before.

"Whilst it irritates my ego to be asked the question [about his position], you're right to ask it and so are the supporters. But true supporters know what's going on.

"We live in a society where we expect quick fixes. I fixed it here quickly and now we're going through a different period of our development."

Northampton have signed 12 players since last season and Boothroyd says he will not be adding to the squad any further.

Following Saturday's defeat against Mansfield - their fourth defeat in four away games - the players were called in on their day off for training.

"The overriding emotion for me is anger," said Boothroyd.

"You do make your own luck over a period of time and we've hit the woodwork more than any other team.

"But that inch or two makes all the difference - and you get that by redoubling your efforts.

"It's about the team getting on with it. We will work every day, all day, until we get this right."

The Cobblers reached the League Two play-off final last term but their away form was an issue even then, with just four wins during the regular season.

This season they have not scored away from Sixfields and have not kept a clean sheet in any of their 10 matches.

And captain Ian Morris says the players alone should take responsibility for their results so far.

"I don't think the fans should look at the manager or the staff - we're just not doing the right things on the pitch.

"We're conceding silly goals and not taking chances we should be putting away.

"We shouldn't be anywhere near where we are in the table."