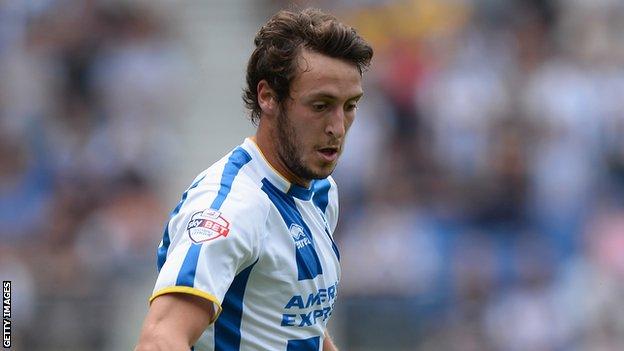 Brighton & Hove Albion winger Will Buckley hopes he can push on after scoring his first goal of the season.

The 23-year-old scored in the 3-1 win over Bolton Wanderers on Saturday.

He told BBC Sussex: "I've probably not been at my best this season but I felt good against Bolton. I've had niggling injuries but you can't really put a finger on things.

"I put a bit of pressure on myself to try and get off the mark. Luckily it came in a great home performance."

He added: "Once I set Calde [Inigo Calderon] up for the second goal I got a bit more confidence. Now I've got the goal hopefully I can kick on."

After losing their first two Championship games under new head coach Oscar Garcia, the Seagulls are now on a six-match unbeaten run.

"In the last five or six games we have been a lot better," Buckley said.

"Oscar has drilled into us what he wants from us and we are taking it on little by little. Hopefully it is showing in our performances now.

"We are coming good but it is difficult to predict where we are going to end up.

"We are enjoying the way we are playing and if we keep playing like we did [against Bolton] we will definitely be in the top half at least this season."