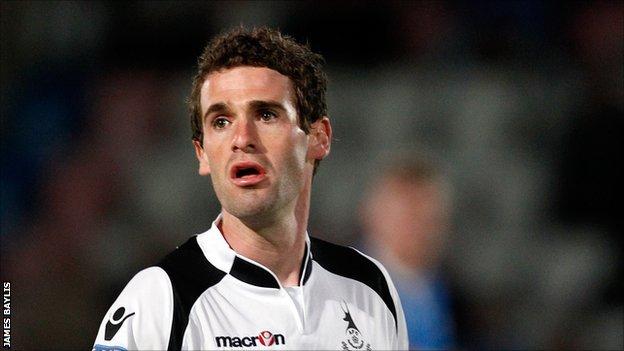 Englishman Joe Yoffe is considering taking Fifa to court over what he claims are unfair restraints on player movement outside the transfer window.

The 26-year-old will be without a club from October, when a successful spell playing in Iceland comes to an end.

Under the current rules, Yoffe cannot join another club in Europe until the transfer window reopens in January.

"A couple of lawyers have already said they'd like to take the case," Yoffe told BBC Radio Shropshire.

Is Yoffe the new Bosman?

"I don't think it's Fifa's idea to obstruct any player. They have the rules in place for what they see as perfect sense, but there is a grey area. It is quite messy."

Manchester-born Yoffe has played in the United States, Canada, Spain, Republic of Ireland, Australia and now Iceland since starting his professional career at Stockport County during their Championship days.

Having also played for FC United of Manchester, moves to Ottawa Fury and Galway United followed, before a brief spell at the start of last season in the Conference Premier with AFC Telford United.

But now, if Yoffe, who has been playing at UMF Selfoss in the Icelandic second tier, decides to take legal action against Fifa, it could lead to the biggest shake-up of the transfer system since the 'Bosman ruling' was enforced in 1995.

"It is something I feel strongly about," said Yoffe, who has scored seven goals in nine league games for Selfoss. "I know a lot of players do as well.

"Some I know are signing shorter deals which means their contract expires before the window closes. It protects them and they don't have to go four months without a club.

"It's not just for me. I want to help others in the same situation.

"A player's career is so short anyway that, when you come to the end of a contract, you'd like to be in the shop window to progress forward as soon as possible after that.

"Having to wait for several months is denying players a right to impress, a right to move forward and a right to earn a living.

"I'm talking to the lawyers about what options are available."