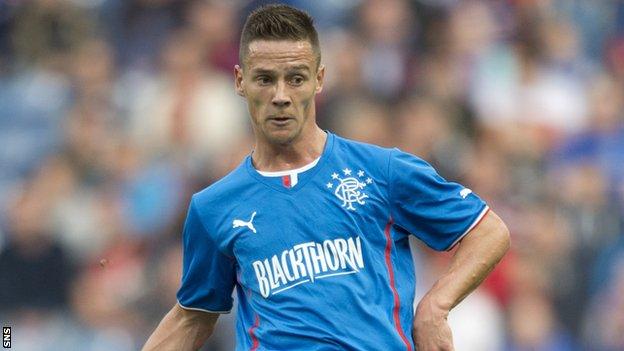 Scottish FA chief executive Stewart Regan has no intention of relaxing strict anti-gambling rules he claims are the envy of other associations.

Players in Scotland are prohibited from betting on any football match.

"At the moment, there are no plans to change our processes and, indeed, we are sharing our definitions with other associations," said Regan.

"In many ways, a number of associations are looking at what the Scottish FA have in place right now.

"Recently, we held a conference at St Andrews and one of the guest speakers there was Ian Smith from the Professional Cricketers' Association, who said that the stance that the Scottish FA has taken is absolutely the right stance.

"Why open yourselves up to further dangers by relaxing the rules we have in place?"

While there were never any suggestions that Black was involved in match-fixing, Regan said: "It is the thin end of the wedge.

If you look at the Scottish FA's rules, they can't be any more clearer - don't bet on football, full stop

"In parts of the Fifa jurisdiction and, indeed, parts of Eastern Europe within Fifa, these issues are rife and are causing a major problem for football."

Black was banned for three matches - with a further seven suspended until the end of the season - as well as being fined after admitting to breaching betting regulations.

and the players' union were among those who suggested that a revue was required to make sure footballers were more aware of the rules.

However, Regan said: "If you look at the Scottish FA's rules, they can't be any more clearer - don't bet on football, full stop.

"Those rules have existed for a long time.

Some had suggested that had been too lenient considering the charges against him included betting against his own team on three occasions.

Regan, though, stressed: "As far as the punishment is concerned, that is for an independent panel.

"It's not a matter for the Scottish FA to get involved with the particular sanctions.

"I don't think the panel have a case to answer at all.

"It's easy for people to sit on the sidelines and question every sanction that a judicial panel comes up with.

"The fact of the matter is the three panellists that were selected viewed the evidence, considered the facts as presented by the compliance officer and came up with the sanction."