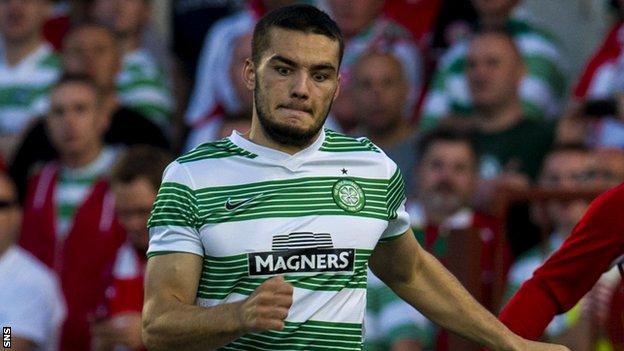 Neil Lennon is disappointed that Lierse counterpart Stanley Menzo made public his criticism of Tony Watt but agrees the striker needs to improve.

Lierse coach Menzo described Watt as "lazy and unfit" despite Celtic's scoring on his debut in the 2-0 weekend win over Kortrijk.

"I'm disappointed Stanley has made it public obviously, but he obviously felt the need to do that," said Lennon.

"Hopefully Tony will take that on board. He has to apply himself better."

Scotland Under-21 international Watt had come on as a substitute to score the second goal for the Belgian top-flight side.

"He's come off the bench and scored, which will give him a huge shot in the arm, and we hope he'll kick on from that," said Celtic manager Lennon.

"He is a little bit short of physical condition and that's down to Tony himself.

"The reason we've put him out on loan is for him to come back better and ready to compete for a first-team place.

"Hopefully Tony will progress the way we want him to progress.

"It is essential for someone his age to want to every day get better and every day improve his game."

Watt will hope to face Lommel United in the Belgian Cup on Wednesday and be selected for the weekend meeting against Anderlecht for the side sitting 10th in the country's top flight.

The young striker, who joined Celtic from Airdrie United in 2011, sprung to prominence when scoring a vital goal in a win over Barcelona in last season's Champions League group stage.

Asked if being thrust into the limelight in such a fashion had hampered Watt's progress, Lennon added: "Psychologically maybe.

"The first thing I said after the game that night was that I don't want it to be a millstone around his neck.

"Because he's got the talent and has the raw ingredients to be a really good player. He just needs to polish those off.

"He will be remembered, forever maybe, for that goal, but it doesn't mean he can't go on to have a good career."