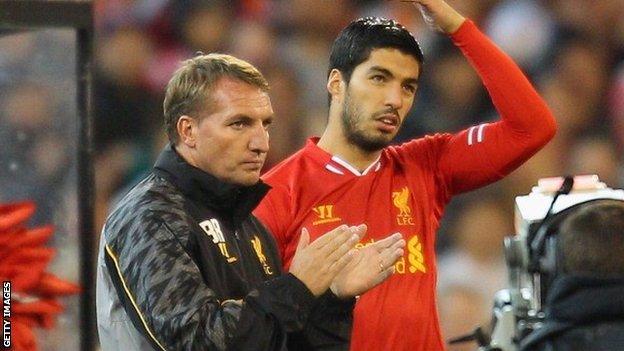 Liverpool boss Brendan Rodgers has not decided whether Luis Suarez will start at Manchester United but says the striker is "really champing at the bit to help the team" after his ban.

He could now return for Wednesday's League Cup third-round tie.

"He'll travel and we'll reflect over the next 24 hours whether he starts," Rodgers said.

Liverpool's unbeaten start to the season was ended on Saturday by Southampton, although Rodgers felt the blow of losing 1-0 at home was eased by the imminent return of the Uruguay international.

Suarez has been playing in games organised for him by the club and represented Uruguay earlier this month in World Cup qualifiers.

The striker, who was heavily linked with a move away from the club over the summer and wanted to join Arsenal, scored twice against Peru in September and Rodgers said he had no doubt the forward was ready to return.

"It has been a really difficult time for him not playing games," added the Liverpool manager.

"How he has prepared himself over the last number of weeks has been fantastic. Everyone knows the depth of his quality and his attitude.

"Once he gets back on the field again he will show what he has shown since he's been here."

The forward already has experience of returning from a lengthy ban for the Reds, having served an eight-match suspension in December that year for racially abusing Manchester United's Patrice Evra.