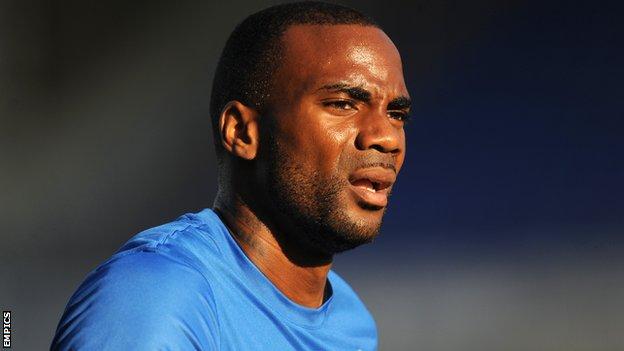 Crawley striker Emile Sinclair hopes he has impressed boss Richie Barker after scoring his first goal for the club.

The 25-year-old was given his first start on Saturday against Colchester following his move from Peterborough.

"When I first came I knew I wouldn't come straight into the team as the boys have been doing well," Sinclair told BBC Sussex.

"I am happy to get the chance from the gaffer. Hopefully he will be thankful for the goal and the performance."

Since I have been here I think we have outplayed [teams] in every game. We just need to get that ruthless streak in us and finish teams off

He added: "It was my first goal in a while so hopefully I can build on it from here."

After joining the Reds for £100,000 last month, Sinclair made two substitute appearances before being being named in the first XI for the trip to Essex, which ended in a 1-1 draw.

The former Nottingham Forest trainee did not feature for Posh this season before his switch to the West Sussex club and he says he is still building his fitness.

"I was thankful to get 60 minutes under my belt," he said.

"I feel a lot sharper and fitter. I am still not there and not 100% but that will come in time.

"The last time I played 90 minutes might have been my hat-trick last season at Hull.

"Last season I had a bad season. I was inured for five months, then not really playing.

"After that I just want to get fit, score as many goals as I can and hopefully get the team into the top six."

Crawley are currently on a four-game unbeaten run and Sinclair believes the side could challenge for a play-off place in League One.

"After the Peterborough game and seeing the boys in training I said there was no reason we shouldn't be pushing for that top six, if not higher," he said.

"A lot of people would say Peterborough are one of the best teams in the league and we went there and outplayed them.

"Since I have been here I think we have outplayed [teams] in every game. We just need to get that ruthless streak in us and finish teams off."