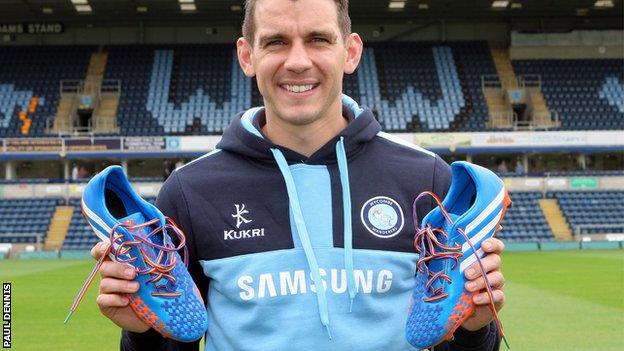 I can't remember a time when laces in football boots have caused such debate.

There has been so much talk, positive and negative, regarding the campaign that saw some professional footballers all over the country wearing

I think it's important to say and unsuitable for such an emotive subject, and I can understand why some players and some clubs have decided that it has taken the credibility out of the campaign.

As soon as I read about the campaign I immediately spoke to our club media officer Ben Campbell and expressed my desire to wear the laces.

We discussed the positives and negatives of the campaign and decided that it was something we should give our backing to. The main point of our conversation was that the core value of the campaign is what we believe in.

The laces arrived at the Wycombe training ground last Thursday and immediately sparked conversation about who was going to wear them, how they looked in the boots and how ridiculous the slogan was!

In the end, about half of the matchday squad wore the laces in Saturday's 1-1 draw against York, with some opting out through superstition.

There are a few reasons why I feel strongly about this subject and was willing to back the campaign.

Firstly, I have a family member who is gay and I know the prejudice he has had to endure over the years.

Secondly, I thank my lucky stars that I have been able to live out my dream of becoming a professional footballer.

What if I was gay and wasn't confident enough to enter the football world, and therefore had that opportunity taken away from me?

I heard that at another club there has been doubt about wearing the laces as the players were concerned that by doing so their sexuality would be questioned.

To many this may sound crazy but I know from first-hand experience that this can be the case.

I signed the Government Charter for Action, tackling homophobia in football, a couple of years ago and in doing so

I didn't realise at the time that this would make others question my sexuality. I soon came to learn that it did and I can honestly say that it did not worry me one bit.

My wife finds it highly amusing and I don't think the lads at the club can believe that it doesn't bother me. But why should it?

Nothing has ever been said directly to me, but I was made aware of a thread on a football chat room, soon after I signed the government charter, where people were speculating about whether I was gay or not.

Also, until recently, the third most popular search on my name on Google was "Matt Bloomfield gay".

How did this make me feel? At the time I was quite surprised that by standing up for something others would question you, that you could be gay just because you support gay rights, but at no point was I worried about it.

To come out in the world of professional football is obviously still a big deal, otherwise there would be openly gay players. Who am I to say that someone should or shouldn't come out?

I just hope that one day in the not too distant future a player feels comfortable enough in their own mind to take that step.