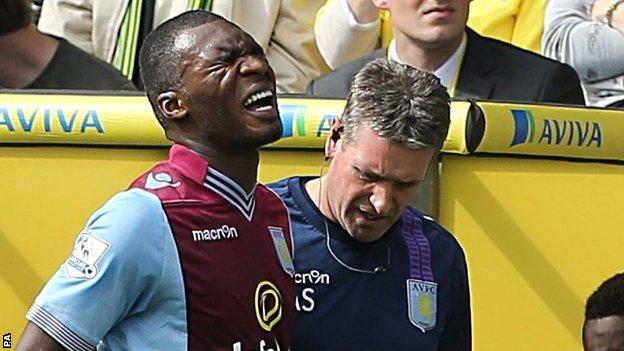 Aston Villa striker Christian Benteke has been ruled out of action for four to six weeks with a hip injury.

The Belgian striker suffered the injury in the win at Norwich at the weekend and Villa feared he may be sidelined for longer.

But scans showed the problem was not as bad as first thought.

"You are never quite sure until you hear from the professor [doctor], but thankfully it is not too serious," said manager Paul Lambert.

"He is feeling a lot better."

The 22-year-old is likely to miss his country's World Cup qualifiers against Croatia and Wales in October, together with Villa's Premier League matches against Manchester City, Hull, Tottenham and Everton.

He has scored five goals this season, helping the Villans to reach 13th place in the Premier League table.