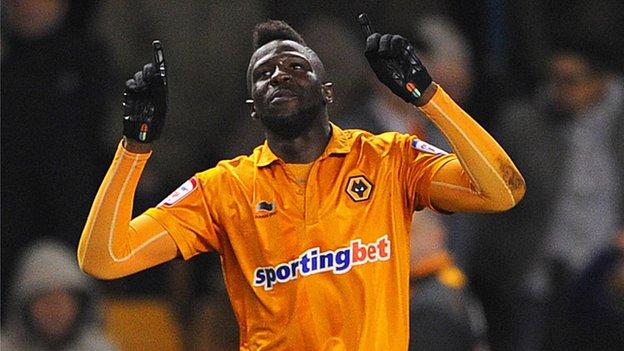 Wolves have broken off talks with Nottingham Forest over the transfer of their French winger Bakary Sako.

The 25-year-old was lined up to move to the City Ground on loan, to be turned into a permanent deal when the transfer window reopens in January.

But Wolves have pulled out of the deal as Forest did not match their terms.

How Wolves bank on Bakary

Following his summer move from St Etienne in 2012, former France Under-21 international Bakary Sako's 10 goals in their Championship relegation season were one of last term's rare plus points for Wolves, ranking him second only to Sylvan Ebanks-Blake, who netted 15 times.

Of his nine Championship goals, only two proved to be match-winners. But he has already twice come up with crucial strikes this season in single-goal wins.

"Everyone involved in the discussions is aware of what our requirements were to reluctantly allow Bakary to leave," said Wolves chief executive Jez Moxey.

"We took the decision to cease all discussions with Nottingham Forest, not because they didn't meet our valuation but because the terms surrounding the offer were unrealistic," he told the Wolves club website.

Wolves are reported to have requested that Forest midfielder Jamie Paterson, who has made just one start for Billy Davies's side since arriving from Walsall this summer, be used as the makeweight in the deal.

But Sako has been on form this season, scoring five goals in nine games to rank as Wolves' joint-top scorer, helping Kenny Jackett's team to third in League One.

And Moxey insists that the main prerogative is simply to keep their best player at Molineux.

"Our position has been firm but consistent," he added. "We don't want to lose Bakary Sako."

It is not clear yet whether Sako, who was also linked with a move to Premier League Fulham in the summer, will take part in Saturday's League One trip to Colchester, having not trained as he was "ill" on Thursday.

But, having also missed last month's away match at Port Vale, Wolves are concerned that the intense local media speculation should cause any further distraction.

A Wolves club statement added: "Everyone at Molineux is disappointed that Bakary Sako, a top-class player and a crowd favourite, has again been distracted by the continuing speculation, handing head coach Kenny Jackett another challenge in trying to re-focus him for this crucial season.

"The club has the utmost respect for the player and hopes he will continue to display that same level of commitment and professionalism once he has recovered from illness and is ready to be considered for selection."