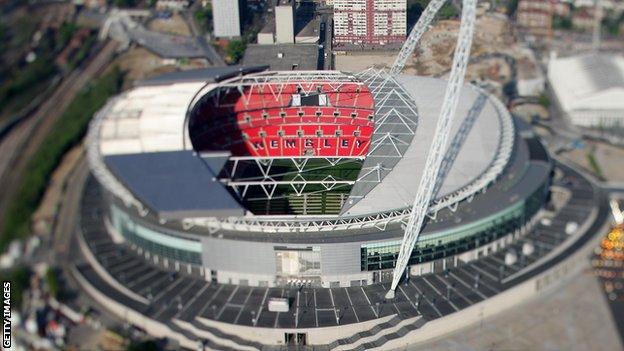 The Football Association believes Istanbul is the "front-runner" to host the semi-finals and final of Euro 2020.

The FA wants to stage those games at Wembley but general secretary Alex Horne says Istanbul is the favourite after missing out on the 2020 Olympics.

"We've taken some soundings," he said. "There's a sympathy for Turkey and it feels like they are the front-runners."

Uefa will stage the 2020 event across 13 cities and says 32 countries have expressed an interest in hosting games.

Final bid dossiers have to be submitted to European football's governing body by 25 April next year, with a decision due on 25 September.

Uefa president Michel Platini has previously said he would back Turkey for Euro 2020 if Istanbul's Olympic bid was unsuccessful.

Istanbul eventually lost out to Tokyo in the race to host the 2020 Games.

"We get the politics around Istanbul, having not got the Olympics," added Horne.

Uefa is offering member countries the chance to bid for two packages of matches encompassing either group stage games and a knockout round match or the semi-finals and final.

The FA will now bid for both packages as will Belgium, Spain, Germany and Wales.

Turkey and Ukraine are believed to have bid only for the semi-finals and final, leaving 25 other nations, including Scotland, bidding solely for group stage and knockout fixtures.

Horne, speaking as the FA announced its financial results for 2012, believes Wembley and London would benefit from the award of either option.

"The impact on the stadium and London of hosting either group stages and semi-final and final will be significant," he said.

"It's something we want to be part of, so we've bid for both."

"The prize of group games and a quarter-final, or certainly a knockout game, here at Wembley, is significant," he said. "You get two games with England at home which has got to be an advantage."

More than 50% of total expenditure went towards investments in the game, with £101m given in total.

Fabio Capello's departure as England manager in February 2012 is also accounted for in the financial statement.

After the Italian and his backroom staff left the England set-up, the team remained without a manager until current boss Roy Hodgson was appointed shortly before Euro 2012.

"We didn't pay Fabio any more than we would have done in the period that we didn't have a manager," said Horne.

"We paid him a small amount of money as severance, but it was less than we'd have paid him if he stayed working until the Euros, significantly."

The £11m decrease in turnover is largely due to a fall in event income for Wembley Stadium, which is wholly owned by the FA.

The FA say this was due to a reduction in events at the venue, which had hosted the Champions League final between Manchester United and Barcelona in 2011.

The 2012 Olympics in London also meant the Community Shield between Manchester City and Chelsea had to be played at Villa Park.