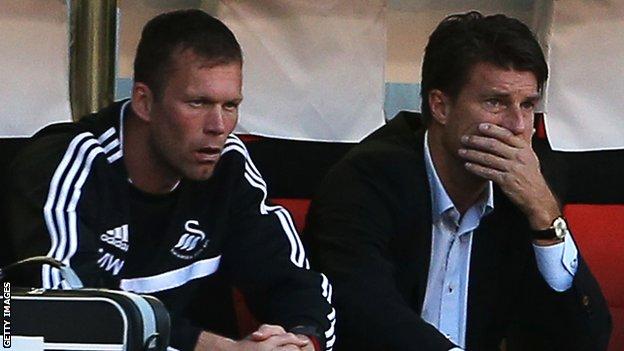 Swansea City assistant manager Morten Wieghorst says boss Michael Laudrup promised the club's players in the summer that he would not leave.

Reports linked Laudrup with a move before the 2013-14 Premier League campaign.

Much of the speculations was prompted by a

"He promised players and the chairman to stay and he's been true to his word," said Wieghorst.

In his first season in charge Laudrup guided Swansea into the Europa League via their Capital One Cup triumph.

They have continued to impress in the opening weeks of the new campaign, that included a week in which they drew 2-2 against Liverpool, won 3-0 in Valencia in Europe and went on to beat Crystal Palace 2-0 in the top flight.

Former Denmark and Celtic midfielder Wieghorst, who told BBC Radio Wales Sport: "I can understand why there's talk of him going to bigger places because he's doing a great job here.

"He's really enjoying it here and he wants to stay.

"Everything's going great and I am pretty sure that Michael feels that he can take this team even further."

Swansea begin their Capital One Cup defence at Birmingham on Wednesday, 25 September.