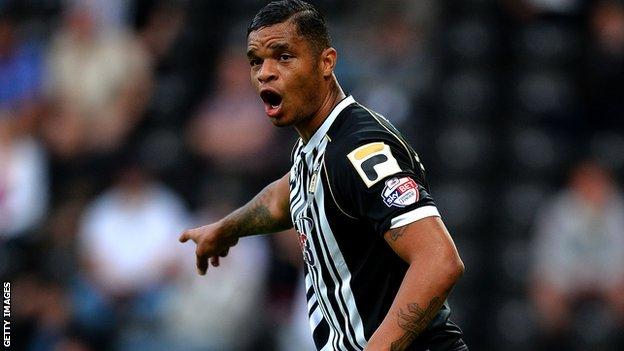 Notts County captain Dean Leacock says the players feel they have "let down" manager Chris Kiwomya and feared he would have been sacked had they not beaten Tranmere Rovers on Saturday.

Notts had picked up only one point from seven games and the players organised a meeting before the 2-0 home win.

"We felt we had let the manager down," Leacock told BBC Radio Nottingham.

"We had words with each other, words that were needed and we got a positive result. Hopefully we can kick on."

Assistant boss Mick Jones said he thought they were likely to lose their jobs had they lost on Saturday and former Derby County defender Dean Leacock agreed.

"That was the impression I was getting. You can't keep losing games," Leacock said on BBC Radio Nottingham's Matchtalk phone in programme.

"You have to give him time. I think he is doing well. With the defeats, it doesn't seem like but we see the way he goes around and the way he is with players. A lot of people do not see that."

The Magpies are still in the League One relegation zone but Leacock said they must be encouraged by their performance against Tranmere.

"We haven't had consistency," Leacock added. "We need to use Saturday's game as a platform.

"We have to keep as a tight group as players and staff. We know it has not been good enough and we have to put on better performances.

"We had words and have finished talking so now it's about doing it on the pitch.

"There was a lot of passion on Saturday and a lot of it was for the manager because he has been under a lot of pressure."