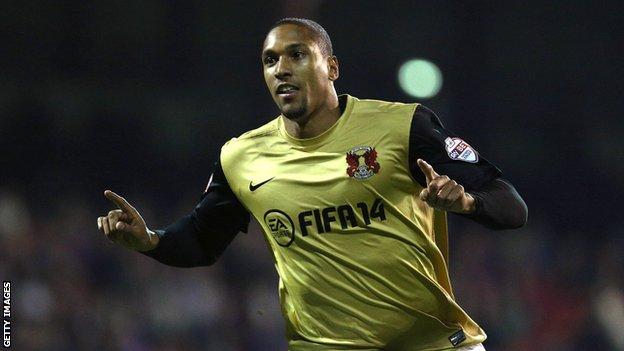 The 26-year-old came off the bench to score the second goal in Orient's 2-0 win at Brentford on Monday.

Slade told BBC London 94.9: "With his pace, he is frightening at the minute. When he is coming on he is looking a real threat down the middle.

"When players are coming off the bench and making that sort of impact it is really encouraging."

He added: "It was a great substitution, wasn't it? And great timing.

It was a tough challenge and we came through it. In the second period we stepped up another gear

"That is his fifth goal and he has not started too many games."

The former Millwall player joined the O's this summer on a free transfer following a successful loan spell with the east London club last season.

Batt's goal against the Bees, in his sixth substitute appearance this season, sealed Orient's eight successive win in League One.

"We came to a difficult place, a difficulty arena and with the cameras on us," said Slade.

"It was a tough challenge and we came through it. We acquitted ourselves reasonably well.

"Brentford probably edged it in the first half. Having said that, I thought we had the better two chances in the first period.

"In the second period we stepped up another gear and looked like the more likely team to go on and win and so it proved."

Slade singled out his defence for their collective performance against Brentford after a fourth clean sheet helped them to restore their five-point lead at the top of the table.

"Sometimes it is your frontmen that win you matches," he said. "In many ways it was our defending that won us the game.

"We put our bodies on the line and I thought the skipper [Nathan Clarke] and the rest of the back four were awesome."