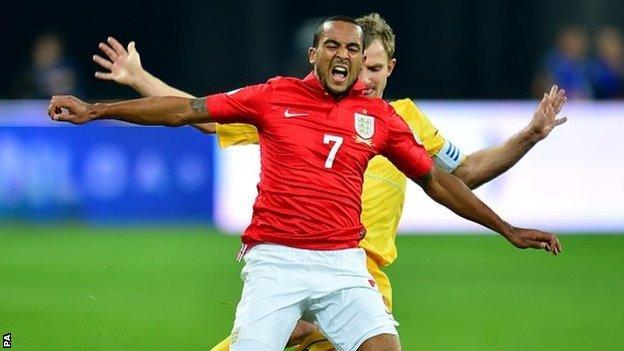 Arsenal forward Theo Walcott will miss England's World Cup qualifiers against Montenegro and Poland after having abdominal surgery on Wednesday.

Walcott, 24, did not play in Arsenal's win against Stoke on Sunday, despite initially being named in the team.

"Theo will be out for a few weeks," said Gunners manager Arsene Wenger.

Roy Hodgson's side need to win those two qualifiers to guarantee qualification for Rio 2014.

Walcott, who scored his first goal of the season in the 2-1 win over Marseille in the Champions League last Wednesday, was replaced in the starting line-up against Stoke by 18-year-old German Serge Gnabry.

He has suffered with a similar injury before, having withdrawn from the England squad with a pelvic muscle problem in March and on that occasion was out for three weeks.

But Wenger was quick to brush away any major concerns, adding: "He has developed some damage to his posterior abdominal wall. It's not a hernia, but it's a little structural problem in his abdomen.

"He will have the procedure in Germany on Wednesday and, because it's so minor, we can begin his rehab immediately.

"We are pleased it's being dealt with quickly and he shouldn't miss too many Arsenal matches. But he will miss the forthcoming international matches with England."