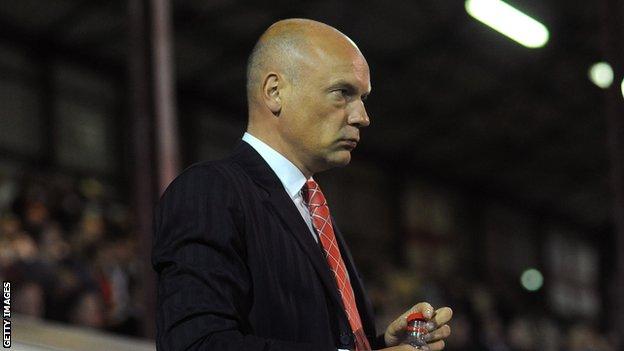 Brentford manager Uwe Rosler admits his side have not got the results they wanted so far this season.

The Bees, who lost in the play-off final last season, sit 10th in the League One table after eight games.

Rosler told BBC London 94.9: "We are not where we want to be. We will keep on trying.

"We had this problem for a while last season. We were so dominant in games and didn't get the first goal or enough goals and got in trouble."

He added: "When you create chances you will score eventually.

"Every time we make a mistake at the moment we get punished. We are making too many, that's for sure."

The Bees suffered their second league defeat of the season on Monday night when they were beaten 2-0 by table-toppers Leyton Orient at Griffin Park.

A penalty from David Mooney, following a foul on the striker by right-back Shaleum Logan, and a goal from substitute Shaun Batt meant the west London club suffered their first home defeat this season.

"I said at half-time that we were looking, good, strong and dominant, and that the team which made the first mistake would probably lose the game," Rosler said.

After we went 1-0 down we didn't do things right and got nervous. We hit far too many long balls

"To make the mistake [for a penalty] forced from a goalkeeper's long ball was the disappointing thing."

Rosler brought on loan duo Joao Teixeira and Marcello Trotta after Mooney's opener in search of an equaliser but he says his side failed to carry out their game plan.

"We needed a goal and the game was more open," the German said.

"I brought Joao and Marcello on as we wanted to pass the ball and get Joao, a creative midfielder behind the strikers, on the ball. With Farid [El Alagui] we would have gone long.

"After we went 1-0 down we didn't do things right and got nervous. We hit far too many long balls and didn't get enough out of Joao.

"He came on to unlock the door but we didn't use him enough as we should."