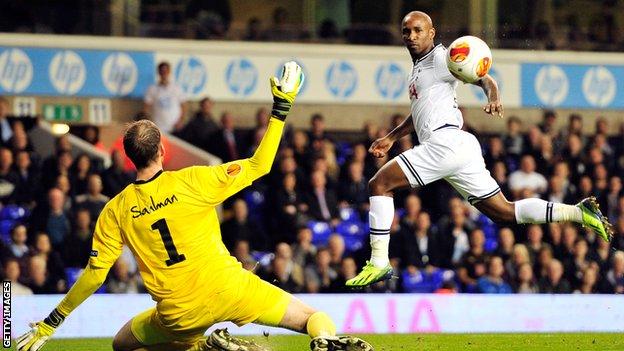 If you do an internet search for Jermain Defoe you will find stories about the goals he keeps scoring, his personal website, his twitter feed and all the usual profile pages you would expect for a leading footballer.

But a glance at the "searches related to Jermain Defoe" will tell you this is not the complete picture. Among the most common words that people search for with the Spurs and England striker's name are "girlfriend split", "girlfriend", "house", "brother" and "baby".

The first two speak for themselves: Defoe is a single man who has, from time to time, been on dates with women. This partly explains the "baby" search, too, although this story turned out to be incorrect. And the house in question is a large property in an affluent part of Essex. The kind of place a London-based, Premier League footballer might choose, then.

But the reference to his brother hints at the awful run of sad news Defoe and his family have had to endure in the last five years.

Jade Defoe, an up-and-coming rapper, died from head injuries after a street attack in 2009. The year before, Defoe's grandmother died and two years later, his grandfather passed away. Last year, Defoe lost his father to cancer and a cousin in a terrible swimming-pool accident.

His response to these bereavements might surprise people who only know him from the tales about his girlfriends, fast cars and big salary. Like fellow footballing "bad boys" Craig Bellamy and Didier Drogba, Defoe has decided to make a difference by setting up a charitable foundation.

Bellamy, a combustible and controversial figure for most of his playing career, has confounded the usual clichés about greedy footballers by setting up a football academy and league in war-ravaged Sierra Leone. Drogba has helped build the best hospital in Abidjan, his home town in Ivory Coast.

This kind of thing is commonplace in the US, where almost every major sportsperson has their own community project or foundation. Former NBA star Dikembe Mutombo, for example, is another to build a hospital - in Congo's Kinshasa - while leading quarterbacks Drew Brees and Peyton Manning have poured millions into initiatives in New Orleans and elsewhere.

These acts are in keeping with a long tradition of public philanthropy by wealthy Americans, something British-based sports stars have not traditionally been associated with, give or take a few honourable exceptions. That might be about to change.

Three days before that trademark display of finishing against Tromso, Defoe hosted a gala dinner in London to raise money for abused, disadvantaged and homeless children in St Lucia.

Born in London, Defoe grew up in a large, extended family that was proud to be both British and West Indian.

His mother Sandra's parents were from St Lucia. The pear-shaped lump of volcanic, Caribbean rock was once famous for its bananas, but is now better known for its infinity pools, beach yoga and all-you-can-eat buffets.

Defoe knows the full story, though. The 30-year-old has been spending time there since he could walk so he knows how friendly the people are - and also how many of them have had to leave.

"My nan and granddad came here to work - my granddad worked in a meat factory, and my nan was at Tate & Lyle, the sugar factory," said Defoe, as boxer Evander Holyfield, Chelsea stars Ashley Cole and Frank Lampard, and half of Spurs' first-team squad arrived at The Grosvenor House hotel, the venue for the fundraiser.

"But they went back to St Lucia in 1995. They had saved up and built a house there. I think they wanted to go back to the sunshine.

"So my mum took me and my sister Chonte to visit them every year. It's my second home - a beautiful island with some fantastic people."

Most visitors would probably consider the 176,000 islanders to be a blessed people, too, but they are not seeing life beyond their hotel's landscaped lawns.

With the island's bananas priced out of competition by larger farming operations elsewhere, St Lucia depends on tourism and light industry. In many ways, it has done well to diversify, but it is a precarious existence, vulnerable to the changing fortunes of global fashion and finance.

To read some of the press he gets you might think Defoe is either immune to the concerns of typical St Lucians, or incapable of understanding them. You would be wrong.

"When most people talk about St Lucia they talk about the beautiful beaches and nice hotels," said Defoe.

"They don't realise there is real poverty there. That would come as a shock to them. That's why we want to raise awareness."

His own awareness was raised in 2010. He had come from England's disappointing campaign at the World Cup in South Africa and wanted to recharge his batteries.

"The island had just been hit by Hurricane Tomas," he said. "A lot of houses and schools had been wiped out, so there were families on the streets and kids weren't getting educated.

"That's when we sat back and realised there was a desperate need."

It is always "we" with Defoe, and to say family is important to him is a little insensitive given what they have been through. Even an amateur psychologist could spot that this might explain why his relationship with his mother is so mutually supportive. The foundation is as much her work as his.

It was Sandra who got talking to locals about the kids playing football with her son on the beach. She wanted to know where their parents were. That was when she heard about the Holy Family Children's Home, the only centre for homeless children on the island.

Before long, contact was made with Sister Antonia David and a visit arranged.

"Sister Antonia explained they only have room for 14 children," said Sandra. "It's quite sad, really, and the social services are inundated."

Three years on, Defoe and his family are funding an extension to the Holy Family site in Castries, the island's capital. But they are also planning to set up a football academy and build a second home in the poorer south.

Speaking at the foundation's launch in June, St Lucia's Prime Minister Dr Kenny Anthony said: "Jermain is one of the best strikers in England and we are tremendously proud of him. To us, he is a St Lucian through and through."

And that is what makes Defoe's actions so credible. A wealthy person sharing their good fortune with those less lucky is nothing new, and almost every charity today uses celebrity endorsements to gain publicity.

Defoe gets this. He gets it in the same way that his response to his brother's death was to help disadvantaged youngsters, first through the Prince's Trust, and then with his own E18HTEEN project in north London.

Ambassador, mentor, philanthropist: these are tags that are rarely mentioned in stories about his love life.

"Media attention is part and parcel of the job," he said. "I guess we're living the dream and there is negative stuff that will go with it. But it is harsh at times, really harsh.

"My family has always told me that it says in the Bible you should not judge people. I try to do that, so I find it quite hard when people judge you without ever meeting you.

"But this is not a case of me thinking I've got to do something positive to turn some negative press around. This comes from my heart and even if the press didn't know about it, I'd still get the same great feeling inside."

The last week or so has gone pretty well for Defoe. His two-goal displays in the Europa League and League Cup should have reminded Andre Villas-Boas and Roy Hodgson of his pedigree as a finisher, but he also raised £80,000 at his gala dinner.

Among the entertainers in London that night were Britain's Got Talent finalists Loveable Rogues. Much more of this kind of thing from Defoe and even the strictest tabloid moralist will have to acknowledge that he too is more loveable rogue than love rat.