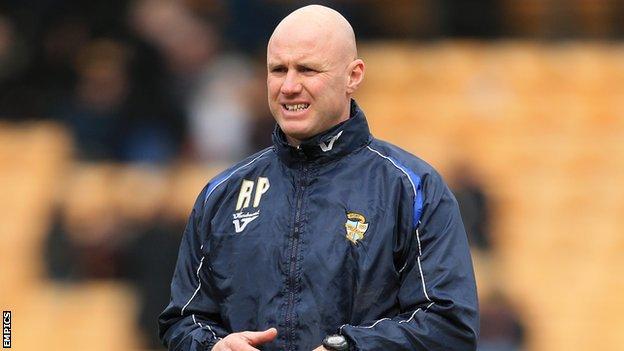 "It will be good experience for Rob," Grew told BBC Radio Stoke.

"He just missed out on two jobs this summer, but he's young, ambitious and I reckon will go a lot further."

Former defender Page won 41 caps and played over 500 matches in a near 20-year professional career that began with Watford and took him to Sheffield United, Cardiff City, Coventry City - where he was signed by Vale boss Adams - and Huddersfield Town, before finishing at Chesterfield in 2011.

Adams then brought him to Vale Park that summer as part of his backroom team.

Page was in contention for the vacant manager's position this summer at Sheffield United, but the job eventually went to David Weir.

"He's about to pass his pro licence," added Grew. "I've worked with him for two years. I know he'll go on to make a good manager."

After undergoing his operation on Monday morning, 51-year-old Adams is recovering well, but the club say it is too soon to say how many matches he will miss.

In his absence, Page and Grew will take charge of a Vale side currently 13th in League One after two wins either side of a 3-2 defeat at leaders Leyton Orient.