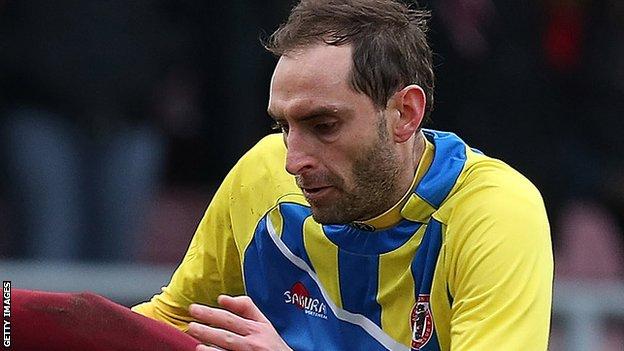 Defender Nicky Hunt believes Accrington will climb off the foot of League Two once Stanley boss James Beattie is able to select from a fully-fit squad.

The Lancashire side have yet to win a league match this season, losing their last eight games in all competitions.

Full-back Hunt, himself recently back from injury, told BBC Radio Lancashire that performances have been good and their results will soon turn.

"You look at the squad on paper and it's a very strong squad," he said.

and has given us another dimension. He's not played for a long time so how he got through 90 minutes [in the on Saturday] I'll never know.

"We've brought in, and then there are the likes of Danny Webber, Laurence Wilson and Michael Liddle to come back into the frame of things."

Former England striker Beattie has had a tough introduction to management, his side's only point of the campaign so far coming from with a 2-2 home draw against Portsmouth on 10 August.

"The league position doesn't lie but we're not focusing on that," added summer signing Hunt. "We're focusing on us winning games.

"When we start winning games, that's when we'll start rifling up the league. It's only a matter of time before the results start coming our way."