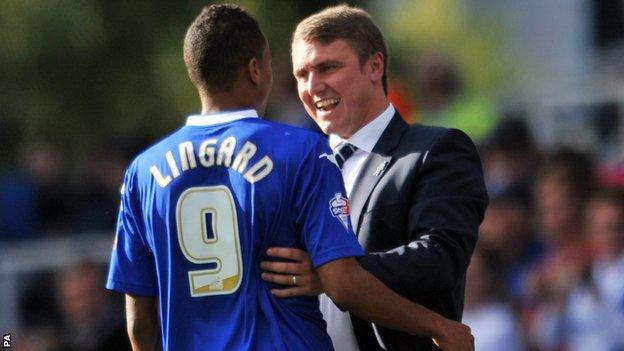 And Clark believes the 20-year-old's remarkable introduction to Championship football may have helped their chances of extending the one-month deal.

"United want him in a team that's doing well, and in helping us win, he ticked another box," Clark told BBC WM.

"They want him to play as much as possible. And Jesse has clearly already taken a liking to us.

The best boys in royal blue

"All I can do is point out what we've done with previously loan players.

"We've shown we can do well by these loan players. I saw Ravel Morrison score for West Ham at the weekend. He's now doing well for them. And there are others. Dan Burn and Kyle Bartley are getting stronger with every game."

Prior to Saturday's game, Blues had managed only four goals in seven matches this season - and one of them was an own goal.

Having lost five of those seven games, their tally of four points out of a possible 21 represented their worst start to a season in 25 years.

But, in the space of one game, the England Under-21 international scored more goals than the rest of the squad had previously managed, evoking comparisons with Blues legend Trevor Francis, who scored all four as a 16-year-old in a 4-0 win over Bolton Wanderers on the same ground in 1971.

"I just wanted the lad to go out and show what he's about and, if he gets a goal, then it's a bonus. To have a debut like that was incredible. He lit up the place.

"You don't get a chance to be at Manchester United if you're not a talented footballer.

"I've chased him for a long time and it took a while to get it over the line. But it was good for him to play when there was a good team performance. Everyone was right at it," said Clark.

"The fans will now be expecting five next time," he joked. "That's the standards he's set himself.

"But I'm just disappointed we haven't got him for our Capital One Cup tie against Swansea on Wednesday night. And we lose Kyle Bartley too, as obviously he can't play against his own club."