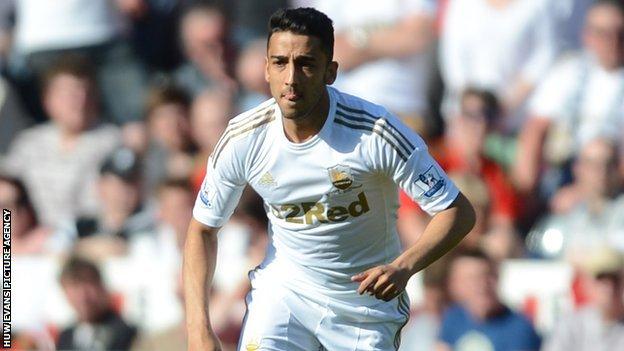 Taylor has been out for four weeks with a dead leg.

He picked up the injury in the 5-1 Europa Cup win over Romanian side Petrolul Ploiesti.

"I've managed to it quicker than we thought. So that's helpful. I'm just looking to getting back to it," said Taylor.

"I have had a few days training and hopefully I will get some game-time."

Taylor is back two weeks ahead of schedule, but it was another injury setback for the 24-year-old Wales international who suffered multiple fractures and a dislocation to his ankle in September 2012.

Taylor says that this season it is vital the Swansea squad is not hit by injury worries.

"The results have been brilliant and we have been lucky that we have kept the squad fit. This week was only me and Pablo [Hernandez] injured." he said.

"That's the key if we want keep doing well game after game we have to get people fit.

"Luckily I'm back now and Pablo won't be far away and then we have a pretty fully fit squad which is perfect for the fixture list we have coming."

Swansea start their Capital One defence after beating Bradford City 5-0 in last season's final at Wembley.

And Taylor believes the Swans go into the third round tie on Wednesday wanting a taste of a Wembley final again.

"It's a cup we won last year so I think we want to do well in it.

"We know what it is like to lift the trophy so we want to go and do it again.

"Cup games are always a warning for every football club. There are upsets every year.

"We will just look to be professional, do what we have done well in the past week and hopefully the result will take care of itself.

"Hopefully I will play some minutes and go from there."