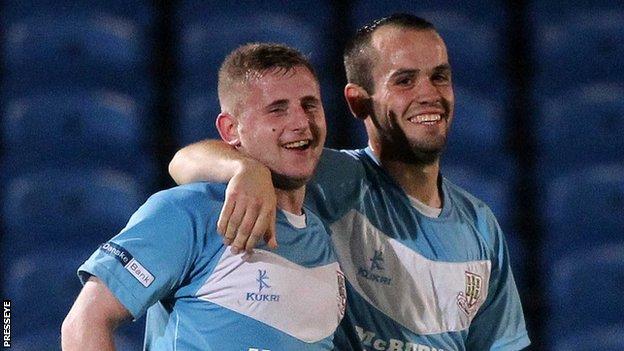 Holders Ballymena United edged past Donegal Celtic 1-0 and Crusaders beat Lisburn Distillery 3-0 in the quarter-finals of the County Antrim Shield.

For Crusaders, Matthew Snoddy fired in on 45 minutes and then Stuart Thompson turned David McMaster's low cross into his own net 11 minutes after the break.

Snoddy grabbed his second after 64, barging into the box, swivelling and then firing in from 12 yards out.

Ballymena began their game brightly at the Showgrounds, Davy Munster heading straight at goalkeeper Brian McGurk from a Tony Kane cross and skipper Allan Jenkins sidefooting over the bar.

Aaron Stewart headed wide after being left unmarked but he then provided the left-foot cross for Cushley to out-jump his marker and score with a looping header.

Before the interval, Kane thumped a 25-yard effort narrowly wide and after half-time Michael McLellan pulled a shot off-target.

Championship One outfit DC had several chances to equalise but Pearse Devine, Gary Warwick, Conor Downey and Mark Burns were unable to convert.

Warwick's strike was superbly tipped over by Dwayne Nelson, Devine's diving header went past the post, Burns was just wide with another headed effort and Downey's attempt was smothered by Nelson.

At the other end, Liggett's low drive was well saved by McGurk and Alan Teggart's weak shot trickled wide of the post when he should have done better.

At Seaview, Snoddy broke clear and scored struck home from 15 yards after Jordan Owens had knocked the ball forward.

Earlier Snoddy had seen his volley pushed onto the bar by Robert Robinson, who also made a fine save to deny Joshua Robinson's header.

Late in the game, Yohann Lacroix turned Ally Wilson's free-kick round the post and Matthew King's cross chipped off the bar.