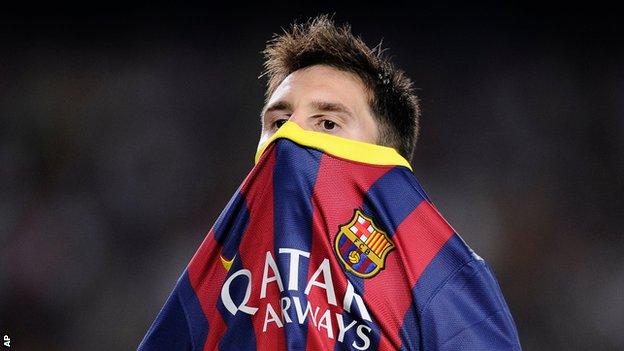 Lionel Messi has responded angrily to reports that he made a gesture after being substituted in Barcelona's 4-1 win at home to Real Sociedad.

The 26-year-old scored his seventh league goal of the season in the win but was taken off by coach Gerardo Martino with 10 minutes left.

Madrid-based tabloid AS reported that Messi was unhappy with being replaced.

But Messi said: "I didn't mean to make any gesture when I came off. I will not accept that certain media tell lies."

Neymar opened the scoring with his first league goal for Barca before Messi headed home the Brazilian's cross.

Sergio Busquets scored Barcelona's third from 20 yards after Messi had hit the crossbar and Sociedad pulled one back when Alberto De La Bella tapped in.

Messi then beat three men to lay on the fourth for Marc Bartra before he was substituted for Sergi.

Messi later wrote on his Facebook page: "Nobody likes to be replaced, but we must accept it because it is the best for our team.

"What I will not accept is that certain media tell lies about any situation that happens around me."

Barcelona have won all six La Liga games but are only ahead of Atletico Madrid on goal difference after they held on to beat Osasuna 2-1.

Real can close the gap on the top two when they face Elche on Wednesday.