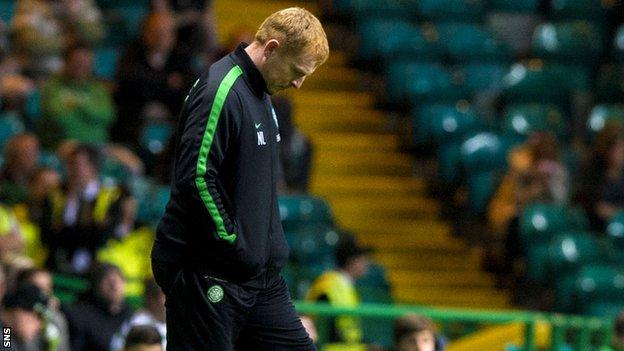 Celtic boss Neil Lennon bemoaned a "funny game" after his side lost to Morton in the Scottish League Cup.

Dougie Imrie's penalty in extra time saw the Championship strugglers book their place in the quarter-finals.

"It's easy to criticise the players and we did everything but score tonight," Lennon told BBC Scotland.

"We had 26 corners, hit the post and had one cleared off the line. We didn't take our chances and congratulations to Morton."

It seems to be a little bit of a bogey competition; it's a sore one but I'll get over it

Despite enjoying the majority of possession and sending countless balls into the area, Celtic failed to breach the Morton rearguard and the League Cup remains the one domestic trophy Lennon is yet to win as Celtic manager.

The Greenock side held on for their first win at Celtic Park since 1971 and their first victory over Celtic since 1985.

"Sometimes the rub of the green doesn't go for you," said Lennon. "I've got to give credit to Morton who defended heroically at times.

"I thought their goalkeeper played very well. Did we do enough to win the game? Yes, but we didn't take our chances so, congratulations to Morton.

"I've got complete faith in the players and you think they'll eventually break them down and get one. We did everything and tried everything to score.

"We changed the team a little bit and maybe I need to rely on the core of players I've got at the minute because maybe some of them aren't up to speed.

"That's an eye-opener for them again but some of them have to do better.

"They didn't have great height. Virgil van Dijk won everything and we couldn't capitalise on the umpteen headers he won.

"It's our bad luck and Morton's good luck. It's not an eye opener; we've had a very demanding start to the season but we should have passed the ball better.

"I can't over-analyse it, we just didn't make the most of the chances that we created.

"It seems to be a little bit of a bogey competition. This is the first time we haven't made the semi-final for a long time; it's a bit sore but I'll get over it."