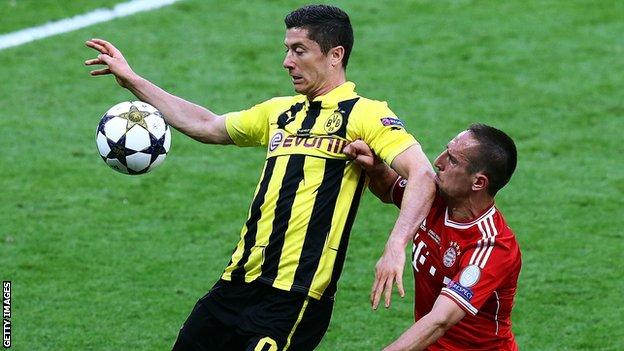 The 25-year-old can sign a pre-contract in January to complete a free transfer switch in the summer.

It has been rumoured for some time that he would move to his side's title rivals and, when asked if he could confirm the move, he told TV station SPORT1: "Yes, because then I can officially sign a contract.

"We still have to wait a bit but I say I think in January I can go."

But he later told German newspaper Bild that he only meant he can confirm his future in January, and reiterated his desire to leave Dortmund.

The Poland international scored 36 goals for the club last season.

In the summer, Germany midfielder Mario Gotze went from Dortmund to Munich for £31.5m.

At the start of 2013, midfielder Lewis Holtby made an earlier than expected switch from Schalke to Tottenham when he signed a pre-contract agreement in early January but then moved later that month for £1.5m.

The Bavarian side went on to become the first side to win the German treble.