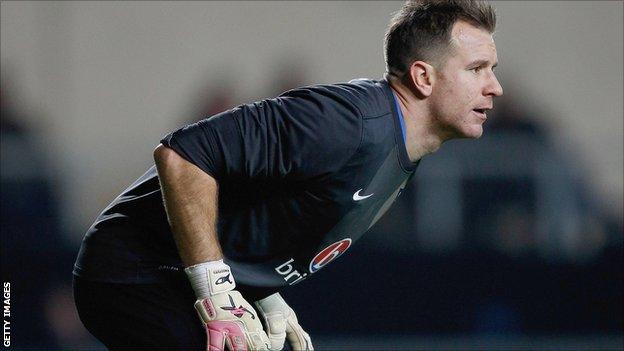 Oxford United keeper Ryan Clarke insists their first league loss of the season has not dented their confidence.

The U's were beaten 1-0 by Chesterfield last weekend and now head to Hartlepool on Saturday without several key players because of injuries and suspension.

"It's important to dust ourselves down now," Clarke told BBC Radio Oxford.

"I don't think we've got the same sort of squad this year where our mentality will be to go on a run of games where we really struggle."

One defeat shouldn't detract from the start we have made. It's important we don't let it burst our bubble

He continued: "I think we've got a group of stronger players everywhere who can bounce back and hopefully that will be the case next week."

The U's will travel to Hartlepool without injured captain Jake Wright, who faces over a month on the sidelines, and James Constable, Andy Whing and Dave Kitson will also be missing.

However, both Clarke and left-back Tom Newey are confident the team can cope and that in Michael Raynes, they have an ideal replacement for Wright.

"It doesn't sound good, but we've got to back ourselves to get a result up there and that is what the squad is for," said Clarke.

"It's unfortunate for Jake, everyone knows how important he is, but Michael Raynes has come in and not let himself down so that is going to happen through the season.

"We've got a lot of experience in the team, hopefully that will stand us in good stead."

Newey added: "One defeat shouldn't detract from the start we have made. It's important we don't let it burst our bubble and that we bounce back as a group of players.

"Michael is an experienced player and you couldn't wish for three better centre backs. Jake is our captain, a player who has done well but Michael has won promotions and played in the Championship so he's more than capable of coming into the team and holding his own."