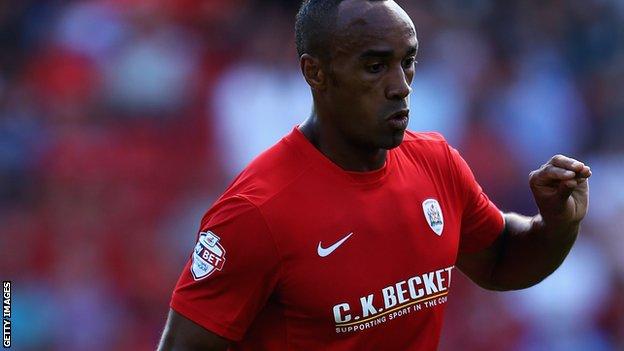 Chris O'Grady's equaliser rescued a point for bottom-of-the-table Barnsley at home to Reading.

The Tykes' striker struck 11 minutes from the end to bring a run of four straight defeats to an end.

Reading had taken the lead early in the second half when midfielder Hal Robson-Kanu drilled the ball home from outside the penalty area.

The result pushes Reading up into fifth place, while Barnsley remain at the foot of the Championship.

David Flitcroft's side dominated for much of the evening against the Royals, who had won three consecutive games prior to their visit to Oakwell.

Barnsley's Jason Scotland shot wide of the post twice in the first half for the home side's best chances, but it was the visitors who went ahead in the 51st minute.

Robson-Kanu's shot from 20 yards out gave Barnsley's on-loan keeper Jack Butland no chance, but the Yorkshire side came close to levelling soon after when Alex McCarthy palmed away a Paddy McCourt effort.

Alex Pearce struck the bar for Reading, but Barnsley were rewarded for their improved performance when O'Grady steadied himself before slotting the ball home from inside the Reading area.

"I see a team that is fighting and that is what they did. But I was pleased with all aspects. The whole team was outstanding, and there was a lot of exciting points, I'm only looking forward.

"I needed a performance, we needed to show the fans we are fighting.

"That was against Reading, they'll be in the top three all season, no doubt about that and we have made a superior team look very ordinary."

"Our mindset was to come for three points. We didn't underestimate the opposition, we have come away from home and I thought our front two were excellent.

"Barnsley may be where they are but they have brought some good players in and they are going to be a big threat going forward.

"We came for three points but we have come away with something so credit my players for hanging in there."