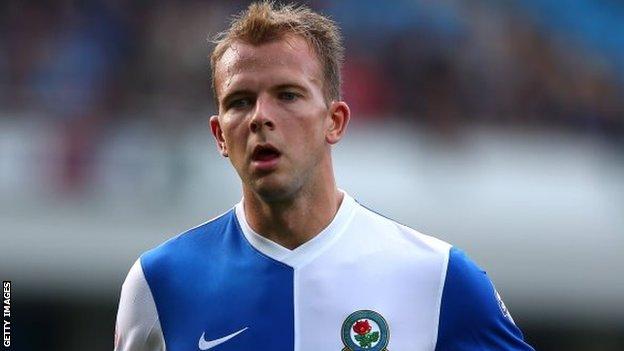 In a match of few chances, Javier Acuna went closest for Watford with a header blocked by Todd Kane.

Watford passed up a chance to go second as they drop out of the top six, with Blackburn up to eighth.

Rovers, who have now lost just one of their last seven matches - winning four - rarely looked threatened by their visitors and could have won more convincingly.

Looking for a fourth successive win for the first time since January 2011, Watford struggled to break down Blackburn's solid rear guard as Gianfranco Zola's men were surprisingly subdued.

The first chance fell to Rhodes but, from Corry Evans' clever through ball, the former Huddersfield man could only drag his shot wide.

It was the hosts who looked the more dangerous and almost took the lead just before the break when Evans' volley was inches wide.

Rhodes spurned another chance on the hour mark from close range before the lightning-quick Josh King had a low shot easily saved by visiting goalkeeper Manuel Almunia after racing down the right.

The deadlock was broken in the 65th minute as Tommy Spurr's long throw was flicked on by Scott Dann and Rhodes headed home the winner.

The striker was only denied a second by Almunia's fingertips in the dying seconds.

Blackburn Rovers manager Gary Bowyer: "Outstanding effort. We backed up the performance on Saturday with an excellent win against a top, top team.

"Jordan Rhodes is appreciative of his team mates. I don't get bored about talking about Jordan. He deserves the plaudits because of his finishing.

"But the other lads are doing tremendous work as well.

"Watford were top scorers before the game and we kept a clean sheet and that says a lot about our young team."

Watford manager Gianfranco Zola: "Disappointed with the result and performance. I knew it would not be a great game of football because that was the sixth game the two teams have played in 17 days.

"I didn't expect us to concede that goal. We were not brilliant going forward, the quality of passing and penetration was not great.

"A lot is a consequence of too many games being played. Strange because then, after this weekend, in 23 days we play one game. The system is strange and the quality of football can't be great."