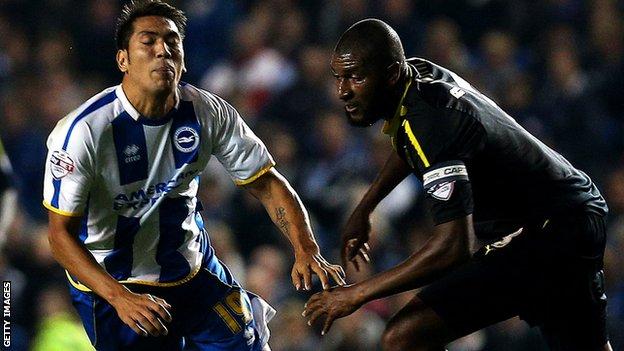 A late goal from Keith Andrews rescued a point for Brighton after Sheffield Wednesday seemed set for their first win of the season.

Andrews shot home from close range in the 89th minute when he latched on to a header from Stephen Ward.

Matty Fryatt had put Wednesday ahead two minutes before half-time when he collected a pass from Jeremy Helan inside the Brighton area.

The point was enough to move Wednesday one place above the relegation zone.

David Lopez and Leo Ulloa spurned chances in the first half for the home side before Wednesday took the lead against the run of play.

The goal stung Brighton into action after half-time, but Wednesday keeper Chris Kirkland was rarely threatened.

Shorn of a cutting edge when Ulloa was carried off after 56 minutes, Brighton resorted to shots from long range, with Andrews going the closest to testing Kirkland.

But after substitute Jermaine Johnson had gone close for Wednesday, the home side levelled with a minute remaining when Andrews took advantage of sloppy defending to salvage a point.

Brighton manager Oscar Garcia: "When you have clear chances to score, you cannot say that we were lucky to get a point. They had one half-chance and scored.

"But we needed seven chances just to score one. Because they took their half-chance it made it difficult for us. You are chasing the game.

(On striker Leo Ulloa, who was carried off): "It looks like a stress fracture. Tomorrow we will know for sure how long we will be without him, but we need him back as soon as possible."

Sheffield Wednesday manager Dave Jones: "I'm frustrated because one lapse in concentration in the whole 95 minutes has cost us. They weren't hurting us, they had become desperate, and if we'd kept our concentration that little bit longer we would have taken the points.

"I'm criticising them for one lapse. We should have dealt with the goal, because it was a simple long-throw. But I tend to be fair, and I think that on the balance of play and in terms of possession it was a fair result.

"We're getting better and moving in the right direction. In the last two games we should have taken six points. We just have too many players playing who need to get fit. Most of them are running on memory."