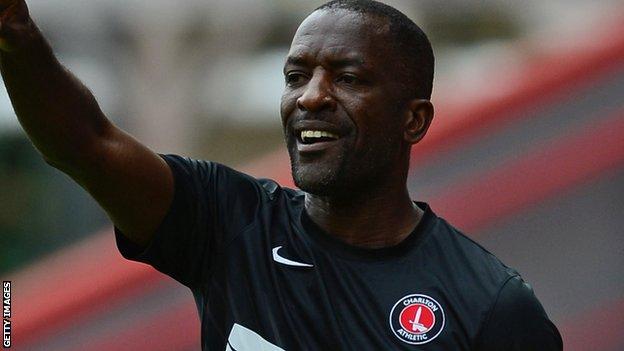 Charlton ended a run of three successive defeats by holding Nottingham Forest to a draw.

Forest continued their record of scoring in every league and cup game this season when midfielder Andy Reid struck against his former club.

Marvin Sordell equalised for the home side from close range early in the second half, before forcing Karl Darlow into an excellent save.

Jordan Cousins almost won it for Charlton, but his volley hit the post.

Forest took the lead inside the first five minutes when Reid curled a glorious free-kick away from the reach of Addicks keeper Ben Hamer and inside the far post for his fifth goal of the season.

Charlton fought back when Rhoys Wiggins twice broke free down the left before delivering crosses for Simon Church and Sordell, whose close-range efforts were both deflected clear. Moments later, Sordell had a goalbound shot blocked by Chris Cohen.

Back at the other end, Lawrie Wilson came to the home side's rescue when he hooked Jamie Mackie's shot off the line.

Five minutes into the second half, Charlton finally breached the last line of the Forest defence when Wilson's low cross found Sordell, who swept in his shot.

The Addicks came close to taking all three points when Cousins' volley rebounded off the outside of the post, before captain Michael Morrison blazed over from six yards in stoppage time.

"I'm very proud of my team.

"We've been under pressure losing the last three games, and then to go 1-0 down after two minutes - it was easily our best performance of the season.

"I thought my players were superb, they handled the situation tremendously well and the crowd were outstanding. They saw a team who really cared."

"They played as if they had nothing to lose, and if they continue to play like that they will be in a good place.

"But we didn't perform. We probably scored too early, but these things happen.

"I'm told we caught them on their best performance of the season so a point away is very good."