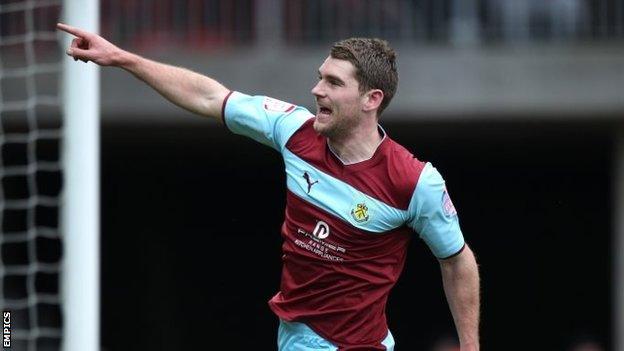 Burnley moved to the top of the Championship as a Sam Vokes penalty and an own goal saw them win at Doncaster.

Wales international Vokes hit his seventh goal of the season at the end of the first half after he was fouled by Doncaster defender Rob Jones.

And Jones capped a torrid evening with a late own goal as the Clarets moved above QPR, who did not play on Tuesday.

Sean Dyche's side have now won five games in a row in all competitions and have only lost once all season.

There were few chances in the first half. Rovers forward Macheda had the first opportunity of the match when he sped down the right before firing in a shot that was blocked by goalkeeper Tom Heaton.

Just before the break, Burnley took the lead. Jones brought down Vokes in the area, who slotted the subsequent penalty to keeper Ross Turnbull's right.

Vokes should have grabbed his and Burnley's second but scuffed his shot wide, before Macheda fired high and wide from just six yards out for Doncaster.

Good keeping by Heaton then prevented the Italian from scoring soon after, with Jones heading over from the corner that followed.

The defender then capped off a night he would like to forget when he put the ball into his own net after Kieran Trippier's cross bounced off him.

"When you're top of the league you naturally come over the radar, but we're happy to be a competitive side.

"The obvious challenge is there are bigger clubs with bigger budgets but they don't have a guaranteed license to have success. We can be successful, especially if we keep delivering.

"We're disappointed to get beaten and a little bit frustrated, especially with the goal on half-time. We had two or three chances to clear the ball.

"When you get beaten by the better team you have to hold your hands up and not make excuses and that's what happened.

"You have to give Burnley credit. They're a good team, they're top of the league for a reason. I would rather concede a goal late on when we're pushing to score than in another way.

"Burnley did the basic things in football and that was the reason they won the game."