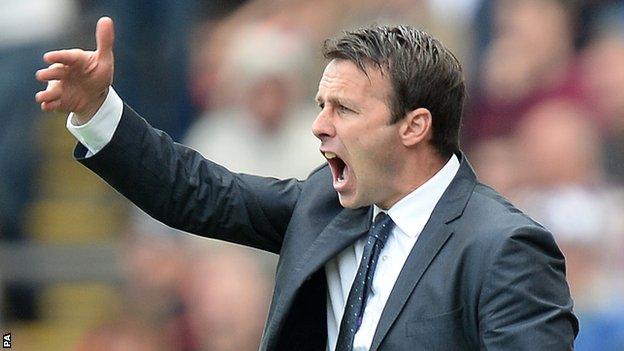 Bolton remain second from bottom and without a win after they were held to a goalless draw by Lancashire rivals Blackpool.

Wanderers, who are enduring their worst league start for 50 years, hit the woodwork through Jermaine Beckford.

The former Everton and Leeds striker also forced Matt Gilks into an excellent save.

Ricardo Fuller had the home side's best chance when his cross-cum-shot was cleared off the line by Alex Baptiste.

Blackpool, who are enjoying their best start in 18 years, could have gone second with a win, but they found themselves under pressure for long periods.

Liam Feeney, signed on loan from Millwall, looked dangerous down the right and almost beat Gilks with a deflected cross.

Goalscoring run comes to an end

The goalless draw ends Blackpool's record of scoring in every Championship game this season.

After weathering the early storm, the home side had a goal disallowed for offside before Bobby Grant fired straight at Adam Bogdan.

Blackpool are now without a win in their last three but could count themselves lucky to take a point after the woodwork prevented Beckford from scoring and Tim Ream fired over from just six yards out for Bolton.

Paul Ince's side are just four points behind league leaders Burnley, while Bolton are one of only four sides in the entire Football League without a win so far.

Blackpool assistant manager Alex Rae: "It was a hard-fought encounter. We knew it wasn't going to be easy because Bolton have a rich squad of players - you look at their bench and there's top players there.

"I suppose the most pleasing thing for me and the manager is that we've got a clean sheet and we can pride ourselves on that. It will give us a foundation to build on."