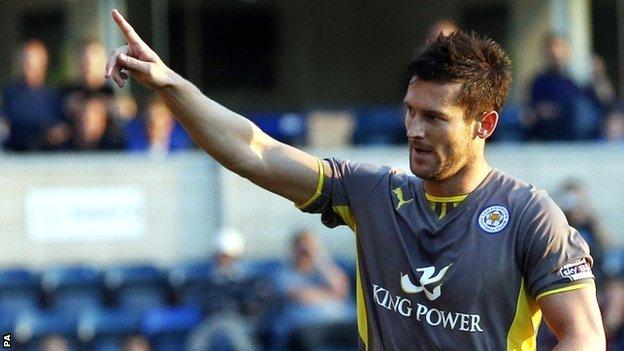 Only goal difference keeps Leicester off the top of the Championship table after they saw off hard-working Yeovil.

Yeovil's Ed Upson and Joel Grant went close in the first half, but the hosts were caught on the counter as Lloyd Dyer finished David Nugent's pass.

Daniel Seaborne brought down Ritchie de Laet soon after and Nugent slotted home from the spot to double the lead.

The Foxes have taken 13 points for their last five league games and only leaders Burnley and QPR's superior goal difference keeps them out of the automatic promotion spots.

Yeovil, by contrast, slip into the relegation zone are are without a win in the league since their opening-day success against Millwall.

The Glovers looked lively in a first half though in which both sides regularly threatened.

Upson could not get enough power on his effort after Kasper Schmeichel had spilled Grant's cross before Anthony Knockaert scuffed a good chance straight at Wayne Hennessey at the other end for the visitors.

Leicester's greater attacking guile told in the second half though as Nugent's low cross was buried by Dyer at the end of a swift attack.

After giving away the decisive spot-kick Seaborne brought down De Laet with an untidy challenge to allow Nugent to extend the lead.

Yeovil came close to an unlikely comeback when Moore's trip on Upson and substitute Hayter's successful penalty conversion set nerves on edge in the visiting defence.

But ultimately Leicester held on, rode their luck and kept up the pressure on the sides above them.

"It is a learning curve for our boys. We haven't got that many lads with experience in the Championship like they have.

"You could see that both teams played with a tremendous amount of power and pace but they just had that little extra quality where it mattered in their two goals.

"We still gave it a go and it was nice to get a home goal."

"We should have been out of sight, let's be honest.

"I don't think anybody could argue that we didn't deserve to win. With the number of chances we've created we could have won by six.

"On another night we could be frustrated by having not put them out of sight.

"It is a good win, the players are continuing to improve as a group. All in all it is a good win but it could have been more convincing but we will improve."