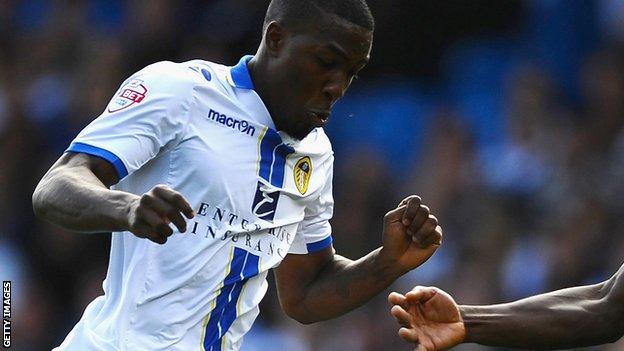 Leeds ended a run of four defeats with a morale-boosting win over Bournemouth.

Cherries keeper Ryan Allsop was sent off on the half-hour for bringing down Noel Hunt, but his replacement Darryl Flahavan dived low to save the resulting penalty from Ross McCormack.

But McCormack met Stephen Warnock's cross from the left to put Leeds ahead.

Ian Harte's free-kick was headed on for Lewis Grabban to fire in an equaliser from close range, but Dominic Poleon's sweetly struck volley won it for Leeds.

Eunan O'Kane presented Leeds with an early gift-wrapped opportunity when he cleared straight to Michael Tonge, who played in McCormack, but Allsop reacted quickly to block.

But fortune then deserted Allsop when Hunt burst through, as the keeper was a fraction late with his challenge, Hunt went flying and referee David Coote immediately pointed to the penalty spot before reaching for the red card.

Bournemouth substitute keeper Darryl Flahavan spent time on loan at Leeds United in 2009 but did not make a first team appearance.

The Cherries had to sacrifice lively winger Ryan Fraser to bring on substitute keeper Flahavan, whose first touch - on his first appearance since April 2012 - was to deny McCormack from 12 yards as he dived to his left.

Just when some over-elaboration was beginning to test the home fans' patience after the break, Leeds made their extra man count as Alex Mowatt spotted Warnock's run from left-back, and the former England international's deep cross was stabbed in by the grateful McCormack.

The goal seemed to release the pressure on Leeds, who began to play with more freedom as Rodolph Austin and Tonge tried their luck from distance.

But Bournemouth were not ready to lie down, despite missing Fraser's attacking threat, as debutant Jack Collison, signed on loan from West Ham hours before, tested Paddy Kenny with a curling 25-yarder.

An injury to Steve Cook meant the visitors were even down to nine men for a few seconds but as Cook waited to rejoin the action, ex-Leeds defender Harte pumped a long free-kick forward from inside his own half and after Elliott Ward challenged for the first header, O'Kane nodded the ball into the path of Grabban who rifled home.

But Leeds were soon back ahead as Warnock swung in another dangerous cross following a corner and the ball was cleared, but fell kindly for Poleon near the penalty spot, and the substitute lashed it in to restore the lead.

The 10 men battled bravely, but a second equaliser - and a first point from their fifth league visit to Elland Road - proved beyond them.

"The only thing that mattered tonight was the result, nothing else, and we deserved to win. We could have gone under when they scored as they had nothing to lose, but we showed a lot of guts and created a lot of chances.

"I've seen it [the penalty incident] again and it's a penalty, he was going to score.

"It reminded me of a game at Reading when I'd just been made permanent manager - we hadn't won for five games when I was caretaker, but we won 1-0 against Barnsley and went on to win eight in a row.

"The crowd were excellent, they didn't panic at 1-1. This league is very tight. Ross McCormack showed great guts, he missed the penalty but kept going and got a terrific goal."

(On the penalty and sending-off) "I've only seen it once, at match speed, and I wasn't in a great position to judge. I feared the worst when I saw the challenge, it was a difficult one and the referee's had to make a split-second decision. When you come to a ground like this and go down to 10 men so early in the game, you've got a mountain to climb.

"I thought we showed a great response to the goal and passed the ball really well for a period, scored a great goal through Lewis Grabban and we hoped we could hang on.

"But there were more positives and negatives for us. Andrew Surman and Darryl Flahavan did really well when they came on after very little game time."