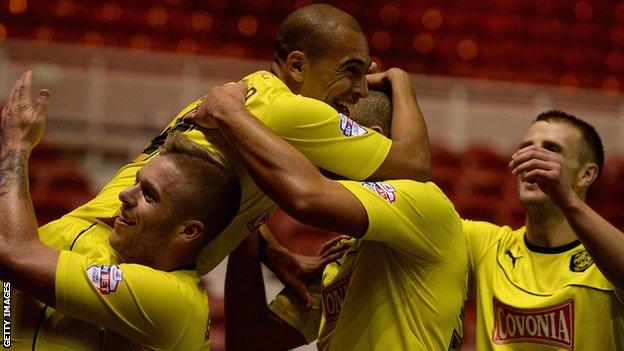 The equaliser came after Vaughan scored his 11th goal of the season to give Mark Robins' side a second-half lead.

The home side could have won it with five minutes remaining when Andy Halliday headed against the post.

The result means Middlesbrough are now without a win from their last eight but manager Tony Mowbray could well be feeling hard done to after dominating their Yorkshire opponents.

Mustapha Carayol and Kei Kamara both bought good saves out of Alex Smithies in the Huddersfield goal before Peter Clarke made a timely intervention to deny Albert Adomah an open goal.

Vaughan is top of the table

When the deadline was broken, against the run of play, there was also a huge element of luck for the visitors/

Daniel Ward's long-range effort hit the post and the home defence failed to react, leaving Oscar Gobern to reach the loose ball first and his effort, from the edge of the box, was deflected in by Vaughan.

Kamara went close again before Gibson made up for an earlier miss to earn his side their sixth draw from their last eight but they they now sit 19th just four points above the bottom three.

The draw also saw Huddersfield moved down the table into ninth, five points behind sixth-placed Blackpool.

"I thought the team worked extraordinarily hard to get a result. After the first 10-15 minutes where it was a bit anxious for us, understandably, not having won at home this season.

"We then got right on top, I thought we really worked their keeper, we controlled the game after the first 15 minutes from start to finish and yet we don't get the result again."

"We started brightly and took a foothold in the game. We passed it OK, but our final pass let us down, which meant that we didn't create a massive amount.

"We managed to get the goal and the game was nip and tuck from that point.

"It was a closely fought contest and I thought that Middlesbrough were good. They threw the kitchen sink at us at times and we have ended up conceding a very soft goal. Had we defended better from the corner we would have gone home with three points."