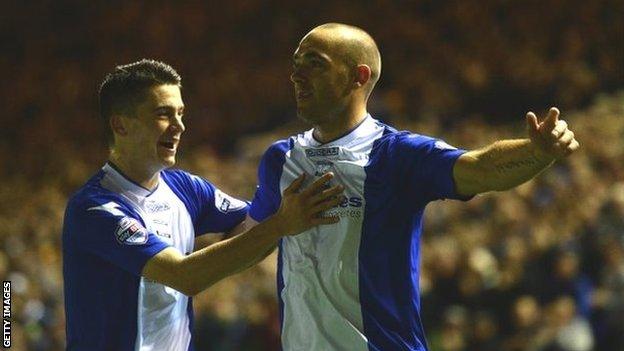 Murphy drilled home a low left-foot shot from a half-cleared cross before doubling the lead with a stunning 20-yard left-foot free-kick curler.

Midfielder Tom Adeyemi then struck from close range on 68 minutes.

Manchester United loanee Jesse Lingard, who earlier missed a penalty, wrapped up the win late on.

In only his third game back after a year out following knee surgery, Birmingham City left-back David Murphy's goal was his first since a 3-1 home win over Crystal Palace in April 2012. His next one took just another 15 minutes to arrive.

Having scored four goals on his Birmingham debut against Sheffield Wednesday 10 days ago, Lingard's first game at St Andrew's since then did not initially go to plan.

He won a penalty after being brought down right on the edge of the area by Millwall right-back Alan Dunne, with the visitors arguing vociferously that the offence had taken place outside the box.

But after referee Andy Woolmer pointed to the spot, Lingard fired placed a weak spot-kick low to David Forde's left, allowing the keeper to make a comfortable save.

Nine minutes later, Murphy put the home side ahead when Andrew Shinnie's right-wing cross was somehow allowed to reach him at the far post.

That lead was doubled in the 34th minute when Liam Trotter fouled Shinnie just outside the area and Murphy's left-foot curled in a beauty.

It took another 34 minutes for Blues to score again when Shinnie's fierce right-foot shot was parried and Adeyemi clipped home the rebound.

No roar for Lions

Only 232 away fans made it to St Andrew's in a crowd of 13,133 -Birmingham's lowest home league gate since the turn of the millennium.

Shortly after, Murphy had another chance when sub Nikola Zigic was fouled by Millwall's centre-half Paul Robinson just outside the penalty area, but Forde went full length to his left to keep out the free-kick. It proved the Blues left-back's final action of the night - and he left to a standing ovation.

But there was still more to come as, against a well-beaten Millwall side who barely threatened all night, Blues got a fourth for the second successive home league game, with Lingard heading home Burke's cross.

With last week's 3-1 Capital One Cup win over Swansea thrown in, Birmingham have scored 11 times in three home games over 10 days - having hit just four goals in their first seven games of the season.

The only disappointment for the home side as they enjoyed their best win since a 4-0 victory at Crystal Palace in April was the crowd of 13,133 - their lowest league gate in almost 20 years.

Birmingham boss Lee Clark told BBC WM: "I already knew David Murphy was the best left-back outside the Premier League and it's taken a frustratingly long time to get him back.

"He told me when he came back for the Sheffield Wednesday game that he was keen to play, but might not last the game, but was desperate to start.

"It was the same again tonight and, if you couple that sort of attitude with his ability, you know just what a good player you've got.

"And, of course, he's got a magnificent left foot."

"It's so important to get the right tempo, and if you don't run and scrap in this league you're going to come unstuck.

"We knew they'd be on the front foot after the results they'd had here against Swansea and Sheffield Wednesday, but we just did not heed the warnings.

"Our pride's been hurt and we now have a massive game coming up against Bournemouth is Saturday before we go into the international break."