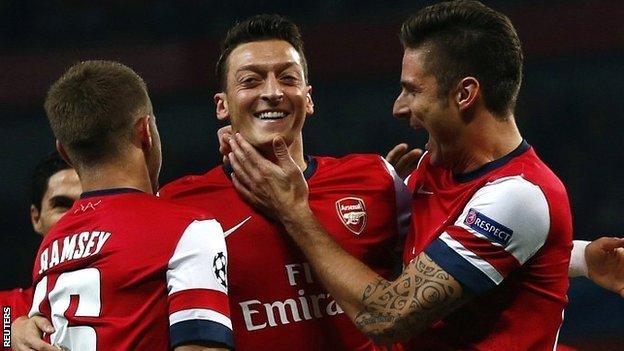 Arsenal's impressive start to their Champions League campaign continued as Mesut Ozil inspired them to victory over Rafael Benitez's Napoli at Emirates Stadium.

The £42m deadline-day signing from Real Madrid scored his first goal for Arsenal with a brilliant finish, and then set up a second for Olivier Giroud as this Group F meeting was effectively decided within the first 15 minutes.

Arsenal's domination ensured the rest of the game was little more than a formality as Napoli, riding high in Serie A, never threatened to upset the optimism that has swept around Arsenal and also taken them to the top of the Premier League.

At the heart of it all was Ozil, the German combining natural grace with deadly contributions that proved too much for Napoli, who had proved their own pedigree by beating last season's Champions League runners-up Borussia Dortmund in their opening group game.

Arsenal produced the perfect follow-up performance to their win in Marseille and now head a group that looked littered with hazards when the draw was made.

In the night's other game, Dortmund beat Marseille 3-0 to join Napoli on three points.

In Ozil, Arsenal have acquired a game-changing talent whose presence and quality has lifted the levels and confidence of his colleagues.

Aaron Ramsey also produced another highly accomplished performance, setting up Ozil's goal and continuing the outstanding form that has been a hallmark of Arsenal's opening to the season.

Ten years on from 'the Invincibles'

Arsenal have now won 10 matches in a row, equalling the best run of the 'Invincibles' of 2003-04, who won the Premier League title without suffering a single league defeat.

As manager Arsene Wenger's name rang around the Emirates in the closing moments, the acrimony that followed the opening-day home defeat by Aston Villa in the Premier League seemed an age away. This is now a buoyant club.

The midfield strength on offer to Wenger was illustrated by the fact that, even with Santi Cazorla injured, he had enough at his disposal to relegate Jack Wilshere to the bench.

It left Ozil and Ramsey to carry the weight of creative responsibility - and they did it brilliantly as Arsenal took a measure of control from the first whistle that they never looked like relinquishing.

Ozil has swiftly become the darling of Arsenal's support and it was easy to see why as he was the central figure in the opening phase that settled the game.

Arsenal's first goal after eight minutes was a thing of beauty, the sort of goal that adds an extra layer of pleasure for the purist Wenger.

Giroud released Ramsey with a subtle flick and when his cross picked out Ozil, he completed a difficult finish with the deceptive ease of a world-class player, side-footing superbly past Napoli keeper Pepe Reina with his left foot.

Ozil was the creator seven minutes later as he ran into the area before a deft flick of his left foot gave Giroud the opportunity for a simple finish.

Benitez has made his reputation with his expertise in the Champions League but Napoli, especially without injured former Arsenal transfer target Gonzalo Higuain, were unable to make any impact in attack and found the Gunners' pace and passing too much.

Former Liverpool keeper Reina could not be blamed for either goal and he was in action to prevent a third for Arsenal with 14 minutes left, blocking from Laurent Koscielny from close range after Mikel Arteta flicked on.

All that was left was for Arsenal to close out another important Champions League victory, which they did without alarm.