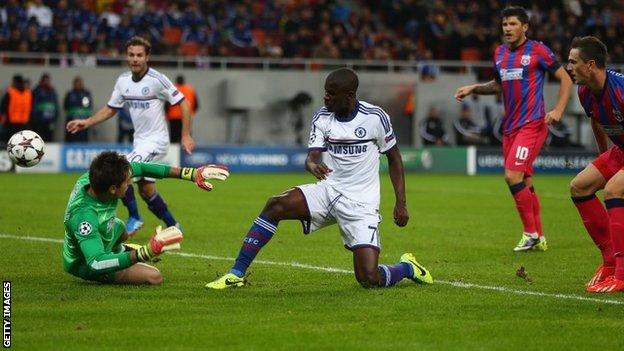 The Brazil midfielder opened the scoring when he poked in after initial good wing-play from Andre Schurrle.

Daniel Georgievski then found his own net after a Samuel Eto'o shot was parried into his path before Ramires fired in the third after the break.

Frank Lampard slotted in the fourth off the post in stoppage time.

Chelsea lie third in the table, level on three points with Basel, who defeated the Blues in their opening Group E match.

In Romania Chelsea produced an adequate performance against poor opposition, although the sprightly displays of both winger Schurrle and playmaker Juan Mata would have buoyed manager Jose Mourinho.

Schurrle, who joined from Bayer Leverkusen this summer for £18m, had his best game so far in a Chelsea shirt although he was helped by the sub-standard defending of full-back Georgievski.

The 22-year-old German played a key role in the first goal, racing past the Macedonian right-back before playing a square pass to Eto'o. The Cameroon forward poked the ball through a couple of defenders before it was prodded in by Ramires, who had timed his run to perfection.

Eto'o had only been on the pitch for eight minutes after lone frontman Fernando Torres came off with what looked to be a knee injury.

The substitute was also involved in Chelsea's second. Spaniard Mata broke free in midfield and found Eto'o, whose firm low shot was parried by goalkeeper Ciprian Tatarusanu and inadvertently slammed in by Georgievski.

With the cushion of a 2-0 lead, Chelsea were less conservative and more fluid in the final third after the break.

They made it 3-0 following a move that began with Schurrle showboating on the left-hand touchline to escape his marker. The Germany international crossed low to Oscar, who laid the ball to Ramires on his right, who smashed home his second.

Both Mata and Oscar hit the woodwork with fierce efforts before veteran midfielder Lampard rounded off a good night's work for the 2011 champions with a placed effort that went in off the left-hand upright in stoppage time.

Steaua's best efforts came after they were 3-0 down, with both Nicolae Stanciu and Cristian Tanase testing Petr Cech.