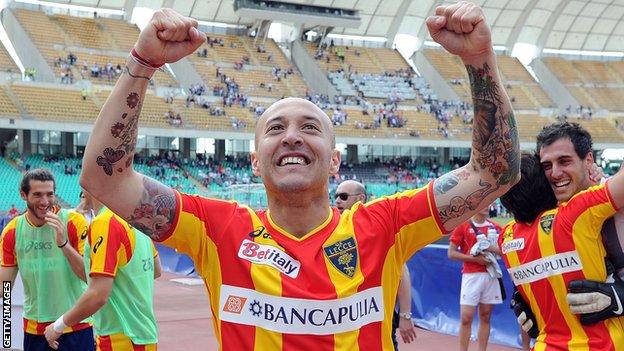 The 33-year-old former Monaco and Sevilla player was a free agent after leaving Italian side Lecce last season.

"With the injuries we've had to Bobby Zamora and Andy Johnson, we're really short of options in that department," said QPR boss Harry Redknapp.

"Javier has spent time with us and integrated into the group very well."

He added: "He arrives with a good pedigree and gives us a much-needed extra option in attack."

Chevanton began his career in his homeland with Danubio, but moved to Europe in 2001 when he joined Lecce, then in Serie A.

He moved to Monaco three years later and then onto Sevilla in 2006.

Since leaving the Spanish outfit in 2010, he has had two further spells with Lecce and spent time playing in Argentina.

Chevanton, who has scored seven goals in 22 appearances for Uruguay, has agreed a contract which runs until 24 December.

"I am very happy to be here, working with a good manager like Harry Redknapp, for a team which is currently top of the Championship with huge ambitions to return to the Premier League," he said.

"I am really looking forward to the challenge of playing in England. I have scored goals all around Europe and I am confident I can continue that record with QPR.

"When I was younger, I loved watching English football. The atmosphere here is great and when the chance came to join QPR, it was all I wanted.

"I have a great will to win and I can't wait to do my best for the club and fall in love with the fans."