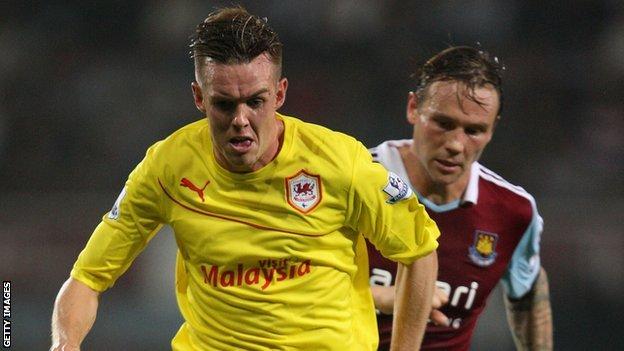 Craig Noone says he is prepared to be patient for his chance to make his Premier League debut with Cardiff City.

The winger has not yet featured in any of the Bluebirds' five league games this season, but made his mark in Tuesday's with a fine individual goal.

Cardiff boss Malky Mackay had fielded a completely changed side from the one that on Sunday.

"The 11 that were out there just want to play football and prove themselves, and get in the manager's head."

Noone, 25, started his football career at non-League level with Skelmersdale United, Burscough and Southport, before Plymouth Argyle bought him in 2008.

A move to Brighton followed in January 2011 before Cardiff paid £1m for Noone 18 months later.

Noone played 36 times for Cardiff last season, scoring seven goals, as the Welsh club took the Championship title by eight points and secured promotion to the Premier League.

Craig Bellamy and Peter Whittingham have been the preferred wide men in midfield so far this season, with Noone unused off the bench when he has been named among the substitutes.

But Noone is confident his chance will come and his cause will have been helped by his goal against the Hammers, winning possession on the right before cutting in and curling an exquisite shot into the far corner.

That goal began Cardiff's fight-back as they recovered from 2-0 to draw level, with Peter Odemwingie scoring his first goal since joining Cardiff from West Bromwich Albion, before Ricardo Vaz Te's late header won it for West Ham.

"It's been a bit frustrating not playing but that's acceptable," Noone added.

"The rise that I've come from - from non-League - I know that it's patience.

"I waited five years to be a pro and I think I can wait a bit more for my chance [in the Premier League], so I'll be working hard.

"It was a good goal but it's not about the goal really, it's about the result and it was disappointing to lose."

Cardiff travel to Fulham on Saturday in the league and Noone will have to wait and see if his midweek efforts were enough to earn him his chance on the pitch.

Bluebirds boss Malky Mackay takes his side to Craven Cottage looking to pick up their first away win as a Premier League club, knowing a defeat could put see them replace Fulham in the bottom three by the end of the weekend.

"We realise it is an away game and that's tough, as you have seen every week," he said.

"But we are relishing going up there even though it will be a tough task.

"I know the individual skill that at least half a dozen of their present team have got and they have five or six individual match winners and an experienced manager [Martin Jol],

"They are a club who have been in the Premier League for a good number of years and they are very stable."