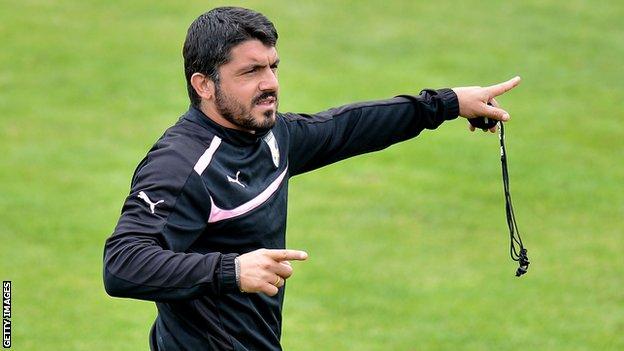 Former AC Milan and Rangers midfielder Gennaro Gattuso has been sacked by Serie B side Palermo after just six league games as manager.

The 35-year-old took charge in the summer after but won just two games and has been replaced by Giuseppe Iachini.

President Maurizio Zamparini said: "His first serious coaching position was perhaps too big a responsibility at a club as demanding as Palermo.

Palermo president Maurizio Zamparini is famous in Italy for firing coaches. The club have changed manager 32 times since 2000.

"The results have proved us wrong."

It had been hoped that Gattuso - who won 73 caps for Italy - was the man to lead the Sicilian side back to Serie A following their relegation to the second division last season.

But after taking seven points from the opening six games Zamparini made the change, with Italian media reporting that Gattuso is the 43rd manager to be fired by the 72-year-old president at Palermo or previous club Venezia.

The exact number is difficult to confirm because of the club's liberal use of the title "interim manager" and the fact that Zamparini has fired the same manager on more than one occasion.

Last season alone, Palermo had three coaches - two of whom were sacked by Zamparini before being re-hired during the campaign.

after following Gattuso from Sion in the summer.