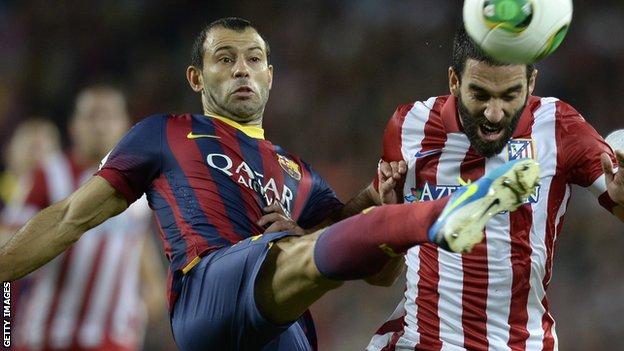 Barcelona defender Javier Mascherano will miss next week's Champions League trip to Celtic as well as two league games with a hamstring injury.

The Argentina international, 29, had to be substituted after half an hour of the Spanish champions' 4-1 win against Real Sociedad on Tuesday.

Medical tests on Wednesday confirmed the ex-West Ham and Liverpool player has strained his right hamstring.

"He will be sidelined for 10 to 15 days," said a Barcelona statement.

Left-back Jordi Alba is already out with a hamstring tear, while centre-back Carles Puyol continues to regain fitness after knee surgery in the summer.

Midfielder-turned-centre-back Mascherano has also been ruled out of La Liga matches at Almeria on 28 September and the visit of Valladolid on 5 October.

"These are Barca's last three games before the international break. There will be no more games after that until the trip to play Osasuna on 19 October," added the Barca statement.