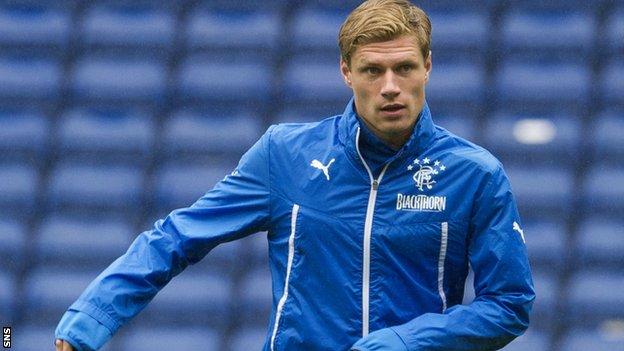 Rangers will not be signing former Hearts captain Marius Zaliukas after the centre-back turned down the club's contract offer.

The Lithuania international, 29, left Hearts in the summer and had been on trial with the Ibrox side.

"Sadly, that deal has gone dead at the moment, I think Marius has one or two other options," manager Ally McCoist told the Rangers website.

Discussions with another recent target Boris Pandza have also ended.

It looks like we'll have to go with what we've got and, to be fair, we've been reasonably solid defensively

The 26-year-old Bosnia and Herzegovina defender was most recently with Belgian club Mechelen.

"[Chief executive] Craig [Mather] effectively put an offer to him which wasn't met so we're just about closing that one off at this moment in time," McCoist added.

"It looks like we'll have to go with what we've got and, to be fair, we've been reasonably solid defensively.

"Hopefully we'll just carry a little bit of luck with injuries and suspensions and we'll see where that takes us.

"We've got options in guys like Sebastien [Faure] and Emilson [Cribari]. Big Jig [Lee McCulloch] has been playing at the back with Bilel [Mohsni] but there are others too."