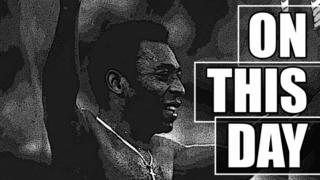 On this day: Pele retires

On 1 October 1977, Brazilian legend Pele, then aged 36, retired from professional football with an exhibition game for New York Cosmos against his former Brazilian side Santos.

Edson Arantes do Nascimento first came to international attention in 1958 - aged 17 - when he helped Brazil to their first World Cup crown, scoring twice in the final for a 5-2 win over hosts Sweden.

A second world title arrived four years later in Chile, but it was his role in Brazil's iconic victory in the Mexico World Cup of 1970 - the first broadcast in colour around the world - that cemented his reputation.

"The King" played his club football for Sao Paulo club Santos from 1956-1974, with his 1,000th career goal coming at the Maracana in 1969 in front of his adoring home support.

Having quit the game in 1974, Pele returned to action for the New York Cosmos the following year with the hope of bringing "o jogo bonito" (the beautiful game) to the American public.

Pele is credited with six five-goal hauls, scored four in a game on 30 occasions and netted 92 hat-tricks to finish his career with 1,281 goals, including 77 for the Brazilian national side.