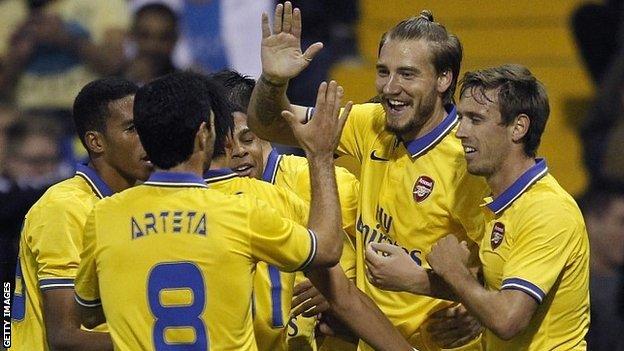 Arsenal will host Chelsea in the stand-out tie of the fourth round of the Capital One Cup.

The Gunners needed a penalty shoot-out to overcome West Brom and set up a meeting with Jose Mourinho's men.

Manchester United's reward for beating eight-time winners Liverpool 1-0 is a home game against Norwich, while Newcastle take on Manchester City.

Arsenal, who have not won the League Cup since 1993, were runners-up to Chelsea in the 2007 final.

The Blues also won the trophy in 2005, the opening silverware of Mourinho's first spell in charge.

United reached the fourth round courtesy of a Javier Hernandez strike early in the second half at Old Trafford and boss David Moyes said he was delighted to be drawn at home again - but was wary of the threat posed by the Canaries.

"Norwich are a good side, they have got a good manager and we will give them every respect," he said.

The matches will be played on 29 or 30 October.