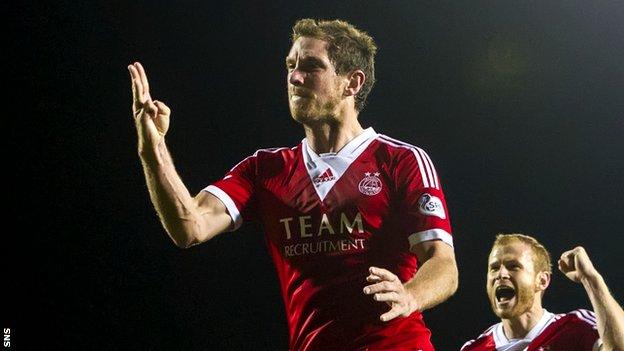 Aberdeen manager Derek McInnes insists he does not feel under pressure to win the League Cup after Celtic's exit.

The Scottish Champions suffered a 1-0 home defeat to Morton, while Aberdeen cruised into Thursday's quarter-final draw after a 5-0 win at Falkirk.

"Everybody left in the tournament will see it as being quite open now that Celtic are out," said McInnes.

"I understand that there is so much expected from Aberdeen and I would never try to fan the flames of that."

"But for me we just need to concentrate on what we are doing, regardless of what the draw throws up. Ideally we would like to be at home.

"At the same time, we went a couple of games recently without a goal and it was the end of the world if you listened to some people.

"For us as a staff and a group of players, we will just keep an even keel on things. We can't stop what other people are saying but we are not kidded, there is work to be done."

Joe Shaughnessy fired Aberdeen ahead at the Falkirk Stadium after 22 minutes before Cammy Smith doubled the Dons' lead nine minutes before the break.

Scott Vernon replaced Calvin Zola on the half-hour mark after McInnes feared the former Burton man might be sent off after collecting an early booking.

Zola's replacement started the second period in fine form as he fired two goals in two minutes before claiming the match ball with a spot-kick after Will Vaulks felled Peter Pawlett in the box with 17 minutes remaining.

Falkirk boss Gary Holt admitted his side played a significant part in their own downfall.

"I thought Aberdeen were really good but I thought we stood off them and let them play," said Holt.

"We looked like we got caught in the mindset that they are the Premier League side and we can't tackle them, whereas every time we got the ball, there was one or two of their guys rattling about us.

"We try to instil in our players that we have to get after the ball but we didn't and it looked like men against boys."