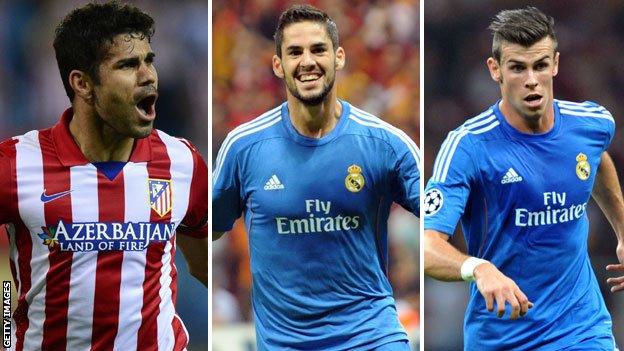 As comparisons go, being favourably likened to the legendary Zinedine Zidane is hard to beat.

That's what happened to Real Madrid midfielder Isco last week, when Spanish sports paper Marca produced a set of statistics to suggest the former Malaga star's first few games with Los Blancos proved him to be a more effective player than the French maestro, who is now an assistant to Carlo Ancelotti at the Bernabeu.

For once, the hype was at least partially justified. In his first six games in the famous white shirt, Isco scored five goals, provided two assists and generally controlled the midfield with a fabulous combination of relentless energy, mazy dribbling and accurate passing.

Not bad for a 21-year-old new arrival seeking to make his mark at one of the biggest clubs in the world.

Asked about the comparison with his assistant, boss Ancelotti chuckled: "I asked Zidane if he agrees and he said 'No, not yet. But he could be very close in the future'.

"He is very similar in terms of ability and mentality. For Isco to be compared with Zidane is not bad after the few games he has played."

Isco rose to international prominence with Malaga last season, playing a starring role in the Andalusian club's unlikely progression to the quarter-finals of the Champions League, where they came an injury-time offside goal away from ousting eventual runners-up Borussia Dortmund.

The midfielder's outstanding performances earned him the 2012 Golden Boy award for the best young player in Europe, and also inevitably sparked serious interest from many of Europe's leading clubs - including Manchester City, whose new coach Manuel Pellegrini tried desperately hard to take Isco with him from Malaga to Lancashire.

In the end, though, a personal phone call from Zidane while Isco was on under-21 duty during Spain's triumphant European Championship campaign this summer was enough to do the trick and persuade him to join Madrid for €30m - a fee that is already looking like a bargain.

Aside from Isco's undoubted magnificence, however, not everything is rosy at the Bernabeu as Ancelotti's men prepare to welcome high-flying local rivals Atletico for Saturday night's Madrid derby.

Although there have been some scintillating passages of play, the general level of Real's performances has been far from convincing and they have not yet settled into a discernible playing method under their new Italian manager.

That was especially the case in their most recent outing on Wednesday night, when they laboured to an exceptionally fortunate 2-1 victory at newly promoted Elche thanks to a controversial penalty by Cristiano Ronaldo, awarded by referee Cesar Muniz Fernandez in the fourth minute of added time even though only three additional minutes had been signalled.

After Wednesday's poor performance, Ancelotti admitted: "If we play like that, we won't win the derby." And among the former Chelsea manager's chief concerns is his team's worrying habit of starting games slowly - they have conceded first in three of their six league games and could have easily done so again at Elche.

Another big worry for Ancelotti is the decidedly underwhelming form of striker Karim Benzema, whose struggles at international level - he hasn't scored for France since June 2012 - are now starting to be transferred to his club outings.

Benzema has registered just two league goals so far this season and has been jeered by significant sections of the Bernabeu crowd.

Although Ancelotti has stayed loyal, insisting he remains happy with the Frenchman's contributions, there are growing calls for youngster Alvaro Morata to be elevated into the starting line-up. If Benzema doesn't resume scoring soon, that will surely happen.

At the other end of the pitch, Ancelotti has to deal with an ongoing goalkeeping controversy following his decision to continue the policy of predecessor Jose Mourinho by favouring Diego Lopez over club captain Iker Casillas, who remains revered by the club's global legion of fans.

Although Lopez has done absolutely nothing to warrant losing his place - on the contrary, he has made a series spectacular saves, especially to salvage a 2-2 draw at Villarreal - the issue remains a ticking time-bomb waiting to explode as soon as Lopez makes his first costly mistake.

And then there's Gareth Bale. The Welshman was forced to pull out of his scheduled home debut after suffering a minor thigh injury during the warm-up of last weekend's meeting with Getafe, and it's uncertain whether he'll recover in time for Saturday's derby.

Even if he does regain fitness, Ancelotti will be reluctant to drop his rival for the right wing berth, Angel Di Maria, who has responded to Bale's arrival by producing an excellent run of form.

Despite their problems, Madrid can at least still rely on their best and most important player - Ronaldo. The incredibly consistent Portuguese star is continuing to deliver the goods, already scoring 13 goals for club and country this season - including seven in just three games since signing a new five-year contract.

Amidst all the talk about the hosts, however, it would be wrong to overlook visiting Atletico. Diego Simeone's mightily impressive team are coming into the derby boasting a 100% record in La Liga, and also started their long-awaited Champions League campaign with a 3-1 victory over Zenit St Petersburg.

Their biggest - and most surprising - asset has been Brazilian striker Diego Costa, who has emerged in magnificent style to fill the considerable gap left by the summer departure of leading scorer Radamel Falcao to Monaco.

Until recently, Costa was better known for his notoriously aggressive and confrontational style of play rather than his goalscoring exploits, but he looks more focused this season and currently sits alongside Barcelona's Lionel Messi atop the La Liga scoring charts with seven goals - a significant improvement in his goals-per-game ratio for a player who has never previously registered more than 10 league goals in a season.

But Atletico's success has been about far more than Costa's power, and the loss of Falcao seems to have allowed them to become a more rounded, less one-dimensional team. Freed from the burden of servicing the requirements of their star striker, there is now a greater fluidity and sense of expression to their attacking play, with creative wide midfielders Koke and Arda Turan particularly benefitting.

Real are still favourites for Saturday's encounter, of course, and history is very much on their side because they boast a 23-game, 14-year unbeaten run against their local rivals in the league. Indeed, the last time Atletico beat Real in La Liga, Simeone was in the middle of his outstanding playing career and had fairly recently goaded David Beckham into his infamous red card at the 1998 World Cup Finals.

In terms of form, however, Atletico are clearly the team to beat. They also have fresh memories of their exhilarating Copa del Rey final triumph over Real in May, which proved they can indeed win at the Bernabeu (even if they needed extra time to do so).

So the game could go either way. But despite their team's patchy performances to date, Real Madrid fans are increasingly confident of their team's chances of success for one simple reason: they have Isco.

If he inspires his team to victory again on Saturday, even Zidane might be ready to pay homage.