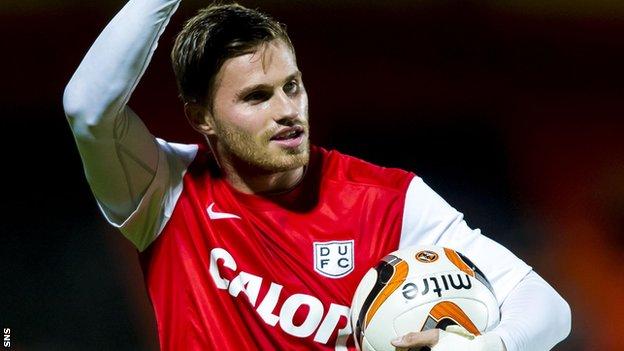 Dundee United manager Jackie McNamara believes all of the League Cup quarter-finalists will have their eyes on the trophy now that Celtic are out.

"Everyone left in it will say they're capable of winning it," said McNamara.

"The tournament has opened up and I'm looking forward to the draw. I'm delighted to be in it as this was a tough tie against Thistle.

Everyone left in it will say they're capable of winning it

Goodwillie, on-loan from Blackburn, had only scored once since his return to United from the Lancashire club in the summer, but his performance was the difference between the two sides when he opened the scoring in the 33rd minute with a drive before heading in just before the break.

By the time he knocked in his third in injury time, United sub Ryan Dow had scored a third for Tannadice side before Christie Elliott netted a consolation for the visitors.

"I never doubted he was capable of that. I'm delighted for him," said McNamara.

"I hope scoring three goals can be a turning point for him. The fourth goal, especially, was a great finish after a great bit of play from Ryan Gauld and a ball across at pace from Stuart Armstrong.

"There's been a lot of pressure on him to come up here and perform.

"Hopefully the other boys - like Nadir (Cifti), Armstrong and Gauld - chipping in with goals has taken a bit of weight off his shoulder and the goals will come. I hope there's more to come."

Partick Thistle manager Alan Archibald bemoaned a couple of first-half slips which handed United the advantage in the defeat, but insisted his side deserved more from the match for their performance.

"If your strikers aren't scoring you have to keep clean sheets and we made a couple of errors," said Archibald.

"Conrad (Balatoni) slipped for the first goal which was disappointing because he had a good performance and we lost a goal from a set-piece.

"But apart from that we were the better team."