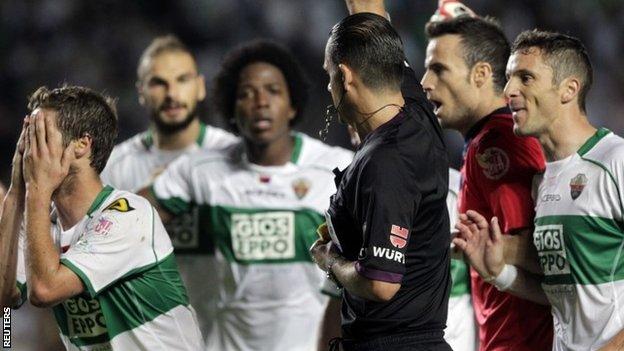 The official that awarded Real Madrid the stoppage-time penalty that enabled them to beat Elche 2-1 might not have been in the "right frame of mind", according to Spain's referees' chief.

Cesar Muniz Fernandez judged Carlos Sanchez to have pulled down Pepe in stoppage time with the scores at 1-1, leading to Cristiano Ronaldo scoring the winner from the resulting penalty.

"I don't think he got it right," said Victoriano Sanchez Arminio. "Maybe he had some family issue that meant he wasn't in the right frame of mind."

The referees' chief added: "But there you go, sometimes we get it right and sometimes not, that's football.

"When someone is not on form on the pitch it's one thing after the other."

Replays seem to suggest that the Portugal defender had held the arm of the Elche player as both fell to the ground as a corner from the right was delivered into the area.

Elche full-back Edu Albacar said his side, promoted to Spain's top flight last season, had been robbed of a point after Richmond Boakye's 91st-minute header had cancelled out Ronaldo's free-kick.

"The match has been stolen from us," said the defender. "Anyone who watched the game can decide why Madrid won, it's very clear."

After the final whistle, Elche midfielder Carlos Sanchez had to be restrained by a team-mate as he tried to make his feelings known to the referee.

Real manager Carlo Ancelotti said he was "not happy" with the performance of his players.

"We suffered a lot, especially at the end. The team did not control the match after Ronaldo's goal," the former Chelsea boss said.

"The important thing is the result but it's not enough, we have to play better.

"Playing like that we will not win the derby - above all we have to play with more intensity and personality."

Meanwhile, Ancelotti told Barcelona's Gerard Pique to "focus on playing rather than talking" after the defender referred to the match as a "comedy film", on Twitter.

Real, who lie third in Spain's top flight, play Atletico Madrid on Saturday. Atletico, who along with Barca have won all of their opening six league games, are two points head of their city rivals.