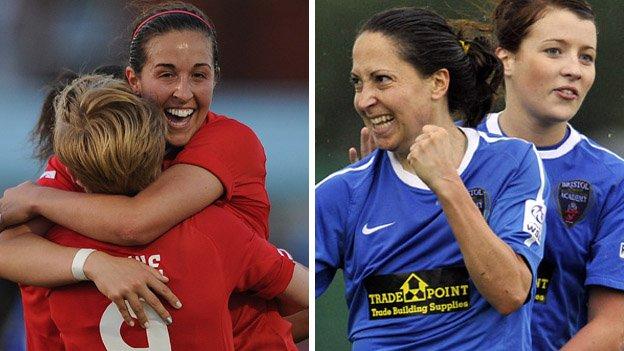 The Women's Super League title will be decided on Sunday as leaders Liverpool Ladies host Bristol Academy on the final weekend of the season.

The Reds are two points clear of second-placed Bristol in the table, meaning a draw or win will see them crowned champions.

But an 11th win of the season will see the Vixens claim the silverware.

It will bring to an end Arsenal's nine-year dominance as top-flight champions in the women's game.

The Gunners won eight consecutive Women's Premier League titles from 2004 and finished top for the first two seasons of the WSL.

But now Liverpool and Bristol, both founding members of the league in its current form, have the chance to lift their first domestic trophy.

"At Arsenal, everyone expected it. It was like a formality," said Bristol defender Corinne Yorston, who won the title with the Gunners in the 2009-10 season.

"They are the benchmark for women's football and everyone knows them. But I think it's great it's either going to be us or Liverpool as it adds to the competition and the excitement for next season.

"At Bristol we've worked extremely hard to get in the position we're in. We've given everything and to be in a winner-takes-all game is an amazing position to be in."

It has been a remarkable turnaround for Liverpool, who finished bottom of the table in the last two seasons and won only one game during the 2012 campaign.

But, following huge investment from the club's American owners, the Reds have won 11 of their 13 league games this term and have the best attacking record in the division.

"Privately, we were hoping for a top-two finish and qualification for Europe, which we've achieved," manager Matt Beard told BBC Radio Merseyside.

"We've been pleased with what we've done so far this year. When we were recruiting, we always knew we were building a side who could compete at the top end of the table.

"The players deserve the credit for how quickly they've understood how we want them to play.

"As a group they're fantastic to work with. Their eagerness to want to learn has been refreshing."

Much like their title rivals, Bristol Academy have been boosted this season by backing from the men's game after they signed a five-figure sponsorship deal with Bristol City.

But, while Liverpool now officially come under the Anfield brand, the Vixens remain the only stand-alone outfit in the WSL.

Bristol finished fourth last season and have twice reached the FA Cup final. For manager Mark Sampson, winning the title would prove how far they have come.

"It's been a long time coming. We've worked so hard for three years to develop this project," he told BBC Sport.

"We've progressed every year and we're well ahead of schedule. To win it would be an incredible achievement for the club, players and the city.

"This club deserves success from the way we've gone about it. It's not just about going out there and buying the best players, it's about developing the club.

"Hopefully we can take that last step to glory."

A late goal by captain Gemma Bonner gave Liverpool a 4-3 win at Bristol in August - only the third game in which the Academy have dropped points.

And Reds boss Beard hopes the home fixture in Widnes will give his players the advantage.

"The players are looking forward to it," he said. "We're hoping the fans who don't go to Sunderland [for men's game] will come out to support us on Sunday.

"Bristol have got a great support, and will be bringing a few hundred to the game, so for us to get as many as we can will be fantastic.

"Hopefully it will be an occasion where we can celebrate."